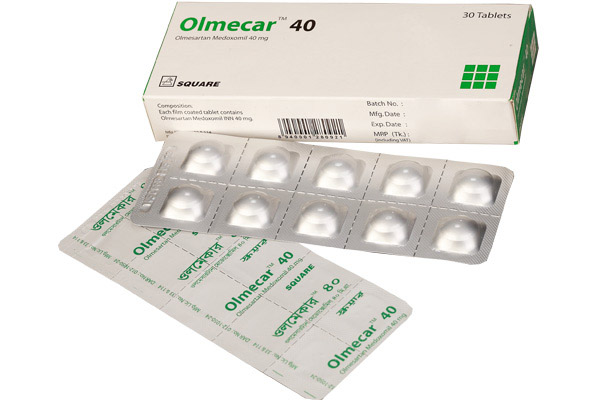 Olmesartan Medoxomil is indicated for the treatment of hypertension. It may be used alone or in combination with other antihypertensive agents.

Dosage must be individualized. The usual recommended starting dose of Olmesartan is 20 mg once daily when used as monotherapy in patients who are not volume-contracted. For patients requiring further reduction in blood pressure after 2 weeks of therapy, the dose of Olmesartan may be increased to 40 mg. Doses above 40 mg do not appear to have a greater effect. Twice-daily dosing offers no advantage over the same total dose given once daily.

No initial dosage adjustment is recommended for elderly patients, for patients with moderate to marked renal impairment (creatinine clearance <40 ml/min) or with moderate to marked hepatic dysfunction. For patients with possible depletion of intravascular volume (e.g. patients treated with diuretics, particularly those with impaired renal function), Olmesartan should be initiated under close medical supervision and consideration should be given to use of a lower starting dose. Olmesartan may be administered with or without food.

With medicine: No significant drug interactions were reported in which Olmesartan was co-administered.
With food & others: Food does not affect the bioavailability of Olmesartan.

Olmesartan is contraindicated in patients who are hypersensitive to any component of this product.

Pregnancy: When pregnancy is detected, discontinue this product as soon as possible. When used in pregnancy during the second and third trimesters, drugs that act directly on the renin-angiotensin system can cause injury and even death to the developing fetus.

Nursing Mothers: It is not known whether Olmesartan is excreted in human milk, but Olmesartan is secreted at low concentration in the milk of lactating rats. Because of the potential for adverse effects on the nursing infant, a decision should be made whether to discontinue nursing or discontinue the drug, taking into account the importance of the drug to the mother.

As a consequence of inhibiting the renin-angiotensin-aldosterone system, changes in renal function may be anticipated in susceptible individuals treated with olmesartan medoxomil. In patients whose renal function may depend upon the activity of the renin-angiotensin-aldosterone system (e.g. patients with severe congestive heart failure), treatment with angiotensin-converting enzyme inhibitors and angiotensin receptor antagonists has been associated with oliguria and/or progressive azotemia and (rarely) with acute renal failure and/or death. Similar results may be anticipated in patients treated with olmesartan medoxomil.

Paediatric use: Safety and effectiveness in paediatric patients have not been established.

Symptoms: There is no experience of overdose with Olmesartan. The most likely effects of olmesartan medoxomil overdosage are hypotension and tachycardia; bradycardia could be encountered if parasympathetic (vagal) stimulation occurred.

Treatment: If intake is recent, gastric lavage or induction of emesis may be considered. Clinically significant hypotension due to an overdose of Olmesartan requires the active support of the cardiovascular system, including close monitoring of heart and lung function, the elevation of the extremities, and attention to circulating fluid volume and urine output.

Store in cool & dry place below 30ºC, protect from light & moisture. Keep out of the reach of children.