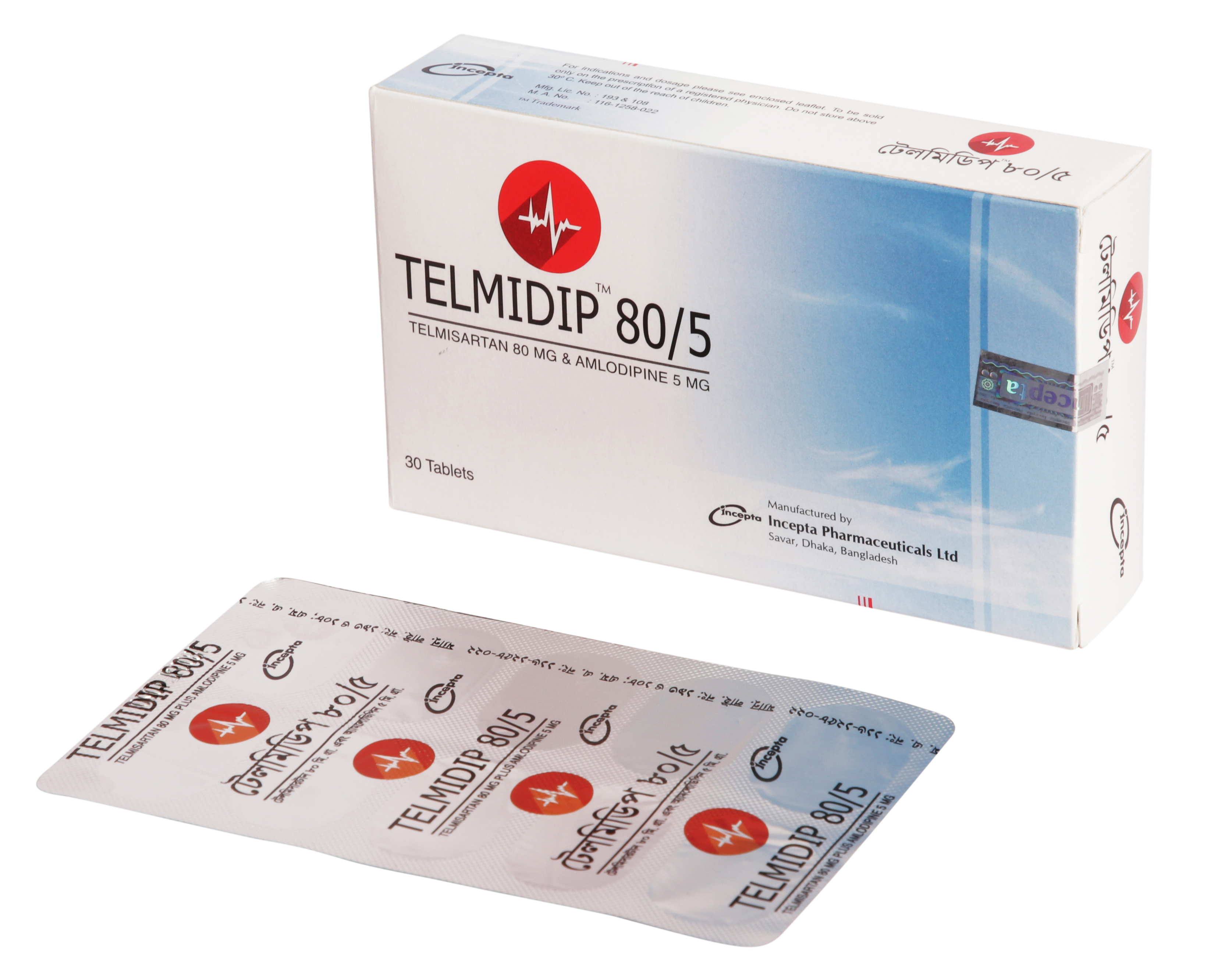 This is indicated for the treatment of hypertension, alone or with other antihypertensive agents. It may also be used as initial therapy in patients who are likely to need multiple drugs to achieve their blood pressure goals.

This is a fixed dose combination of Telmisartan and Amiodipine. Telmisartan, a non-peptide angiotensin receptor blocker (ARB), is specific angiotensin II antagonist acting on the AT1 subtype. Angiotensin II is the principal pressor agent of the renin-angiotensin system, with effects that include vasoconstriction, stimulation of synthesis and release of aldosterone, cardiac stimulation, and renal reabsorption of sodium, which leads to an increase in blood pressure (hypertension). Telmisartan blocks the vasoconstrictor and aldosterone-secreting effects of angiotensin II by selectively blocking the binding of angiotensin II to the AT1 receptor in many tissues, such as vascular smooth muscle and the adrenal gland. Therefore, Telmisartan dilates blood vessels and reduces blood pressure without affecting pulse rate. Telmisartan has much greater affinity (>3,000 fold) for the AT1 receptor than for the AT2 receptor. It does not bind or block other hormone receptors or ion channels known to be important in cardiovascular regulation.

Initial Therapy: Patient may be initiated on this tablets if it is unlikely that control of blood pressure would be achieved with a single agent. The usual starting dose is 40/5 mg once daily. Patients requiring larger blood pressure reductions may be started with 80/5 mg once daily. Initial therapy with this is not recommended in patients 575 years old or with hepatic impairment.

Add-on Therapy: Patients not adequately controlled with amiodipine (or another dihydropyridine calcium channel blocker) alone or with telmisartan (or another angiotensin receptor blocker) alone. Patients treated with 10 mg amiodipine who experience adverse reactions such as edema, may be switched to this 40/5 mg tablets once daily, reducing the dose of amiodipine without reducing the overall expected antihypertensive response.

Replacement Therapy: Patients receiving amiodipine and telmisartan from separate tablets may instead receive this tablets containing the same component doses once daily. Dosage must be individualized and may be increased after at least 2 weeks. The maximum recommended dose of this tablet is 80/10 mg once daily.

Co-administration of telmisartan did not result in a clinically significant interaction with acetaminophen, amiodipine, glyburide, simvastatin, hydrochlorothiazide, warfarin, or ibuprofen. Telmisartan is not metabolized by the cytochrome P450 system and had no effects in vitro on cytochrome P450 enzymes, except for some inhibition of CYP2C19.

Telmisartan is not expected to interact with drugs that inhibit or are metabolized by cytochrome P450 enzymes, except for possible inhibition of the metabolism of drugs metabolized by CYP2C19.

Pregnancy Categories C (first trimester) and D (second and third trimesters). It is not known whether telmisartan and amiodipine is excreted in human milk. Because of the potential for adverse effects on the nursing infant, discontinue nursing or discontinue the drug after taking into account the importance of the drug to the mother.

Pediatric use: Safety and effectiveness of Telmisartan & Amiodipine combination in pediatric patients have not been established.

Geriatric use: Initial therapy with Telmisartan & Amiodipine combination is not recommended in patients ≥75 years old.

Telmisartan: Limited data are available with regard to overdosage in humans. The most likely manifestations of over dosage with telmisartan tablets would be hypotension, dizziness, and tachycardia; bradycardia could occur from parasympathetic (vagal) stimulation. If symptomatic hypotension should occur, supportive treatment should be instituted. Telmisartan is not removed by hemodialysis.

Amiodipine: Overdosage might be expected to cause excessive peripheral vasodilation with marked hypotension and possibly reflex tachycardia. If massive overdose occur, active cardiac and respiratory monitoring should be instituted. Frequent bipod pressure measurements are essential. If hypotension occur, cardiovascular support including elevation of the extremities and the judicious administration of fluids should be initiated. If hypotension remains unresponsive to these conservative measures, administration of vasopressors (such as phenylephrine) should be considered with attention to circulating volume and urine output. Amiodipine is not removed by hemodialysis.

Do not store above 30°C. Protect from light and high humidity. Keep out of the reach of children.