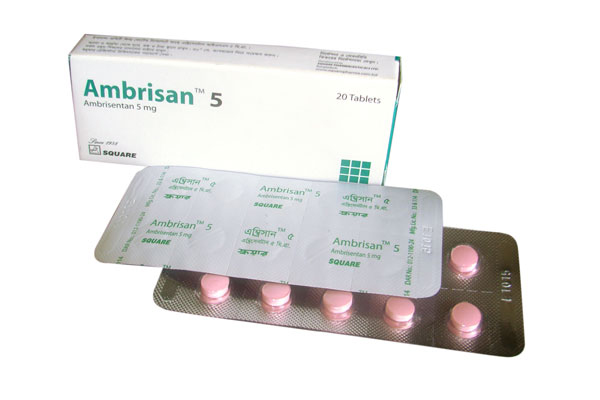 Ambrisentan is indicated for the treatment of pulmonary arterial hypertension (PAH) (WHO Group 1):

Endothelin-1 (ET-1) is a potent autocrine and paracrine peptide. Two receptor subtypes, ETA and ETB, mediate the effects of ET-1 in the vascular smooth muscle and endothelium. The primary actions of ETA are vasoconstriction and cell proliferation, while the predominant actions of ETB are vasodilation, antiproliferation, and ET-1 clearance.

In patients with PAH, plasma ET-1 concentrations are increased as much as 10-fold and correlate with increased mean right atrial pressure and disease severity. ET-1 and ET-1 mRNA concentrations are increased as much as 9-fold in the lung tissue of patients with PAH, primarily in the endothelium of pulmonary arteries. These findings suggest that ET-1 may play a critical role in the pathogenesis and progression of PAH.

Initial treatment is 5 mg once daily, and can be increased to 10 mg once daily if 5 mg is tolerated. Ambrisentan may be administered with or without food.

Ambrisentan may cause fetal harm when administered to a pregnant woman. Ambrisentan is contraindicated in women who are or may become pregnant. If this drug is used during pregnancy, or if the patient becomes pregnant while taking this drug, the patient should be apprised of the potential hazard to a fetus. Pregnancy must be excluded before the initiation of treatment with Ambrisentan and prevented during treatment and for one month after stopping treatment. Ambrisentan is contraindicated in patients with Idiopathic Pulmonary Fibrosis (IPF) including IPF patients with pulmonary hypertension (WHO Group 3).

Decreases in hemoglobin concentration and hematocrit have followed administration of other endothelin receptor antagonists and were observed in clinical studies with Ambrisentan.

Fluid Retention: Peripheral edema is a known class effect of endothelin receptor antagonists, and is also a clinical consequence of PAH and worsening PAH.

Pulmonary Veno-occlusive Disease: If patients develop acute pulmonary edema during initiation of therapy with vasodilating agents such as Ambrisentan, the possibility of pulmonary veno-occlusive disease should be considered, and if con_rmed. Ambrisentan should be discontinued.

Hematological Changes: Decreases in hemoglobin concentration and hematocrit have followed administration of other endothelin receptor antagonists and were observed in clinical studies with Ambrisentan.

Hepatic impaired patient: Ambrisentan is not recommended in patients with moderate or severe hepatic impairment.

Store in a cool and dry place, below 30° C. Protect from light and moisture.