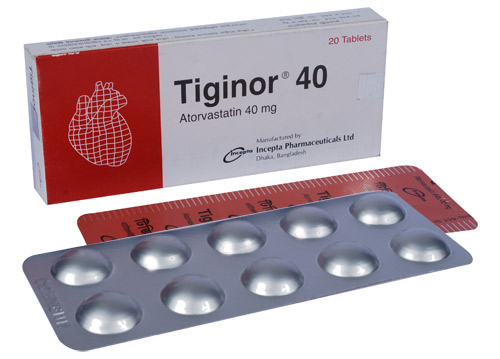 Atorvastatin is indicated as an adjunct to diet to reduce elevated total cholesterol, LDL cholesterol, apolipoprotein B (Apo-B) and triglycerides levels in following diseases when response to diet and other non-pharmacological measures is inadequate.

Atorvastatin is a selective inhibitor of HMG-CoA reductase. This enzyme is the rate-limiting enzyme responsible for the conversion of HMG-CoA to mevalonate, a precursor of sterols, including cholesterol. Atorvastatin lowers plasma cholesterol and lipoprotein levels by inhibiting HMG-CoA reductase and cholesterol synthesis in the liver and increases the number of hepatic LDL receptors on the cell surface for enhanced uptake and catabolism of LDL.

The risk of myopathy during treatment with Atorvastatin is increased with concurrent administration of cyclosporin, fibric acid derivatives, erythromycin, azole antifungals and niacin. No clinically significant interactions were seen when Atorvastatin was administered with antihypertensives or hypoglycemic agents. Patients should be closely monitored if Atorvastatin is added to digoxin, erythromycin, oral contraceptives, colestipol, antacid and warfarin.

Atorvastatin should not be used in patient with hypersensitivity to any component of this medication. Atorvastatin is contraindicated in active liver disease or unexplained persistent elevations of serum transaminases. It is also contraindicated in patient with history of serious adverse reaction to prior administration of HMG-CoA reductase inhibitors.

Atorvastatin is generally well-tolerated. The most frequent side effects related to Atorvastatin are constipation, flatulence, dyspepsia, abdominal pain. Other side effects includes infection, headache, back pain, rash, asthenia, arthralgia, myalgia.

Atorvastatin is contraindicated in pregnancy and while breast-feeding. Women of child bearing potential should use appropriate contraceptive measures during Atorvastatin therapy. If the woman become pregnant while taking Atorvastatin, it should be discontinued.

Liver effects: Liver function tests should be performed before the initiation of treatment and periodically thereafter. Atorvastatin should be used with caution in patients who consume substantial quantities of alcohol or have a history of liver disease. Atorvastatin therapy should be discontinued if markedly elevated CPK levels occur or myopathy is diagnosed or suspected.

Geriatric Use: Of the 39,828 patients who received Atorvastatin in clinicalstudies, 15,813 (40%) were ≥65 years old and 2,800 (7%) were ≥75 years old. No overall differences in safety or effectiveness were observed between these subjects and younger subjects, and other reported clinicalexperience has not identified differences in responses between the elderly and younger patients, but greater sensitivity of some older adults cannot be ruled out. Since advanced age (≥65 years) is a predisposing factor for myopathy, Atorvastatin should be prescribed with caution in the elderly.

There is no specific treatment for Atorvastatin overdosage. In the event of an overdose, the patient should be treated symptomatically, and supportive measures instituted as required. Due to extensive drug binding to plasma proteins, hemodialysis is not expected to significantly enhance Atorvastatin clearance.