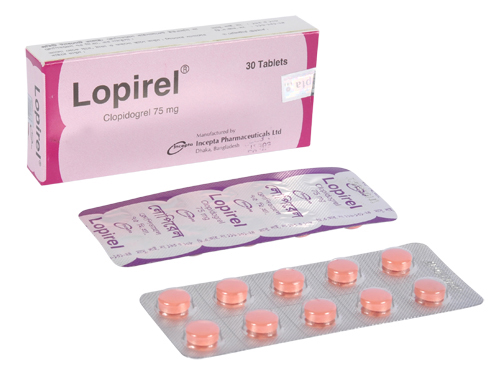 Recent MI, recent Stroke, or established Peripheral Arterial Disease: In patients with established peripheral arterial disease or with a history of recent myocardial infarction (MI) or recent stroke it is indicated to reduce the rate of MI and stroke.

Clopidogrel is a prodrug. It inhibits platelet activation and aggregation through the irreversible binding of its active metabolite to the P2Y12 class of ADP receptors on platelets. Dose-dependent inhibition of platelet aggregation can be seen 2 hours after single oral doses. Repeated doses of 75 mg per day inhibit ADP-induced platelet aggregation on the first day, and inhibition reaches steady state between Day 3 and Day 7.

It is given orally with or without food.

Clopidogrel is contraindicated in the following conditions: Hypersensitivity to the drug substance or any component of the product. Active pathological bleeding such as peptic ulcer or intracranial hemorrhage.

There are no adequate and well-controlled studies in pregnant women. It should be used during pregnancy only if clearly needed. It is unknown whether clopidogrel is excreted in human breast milk. A decision should be made whether to discontinue nursing or to discontinue the drug, taking into account the importance of the drug to the mother.

Safety and effectiveness in pediatric populations have not been established. No dosage adjustment is necessary in elderly patients.

Keep below 30°C temperature in a dry place. Protected from light. Do not freeze. Keep out of the reach of children.