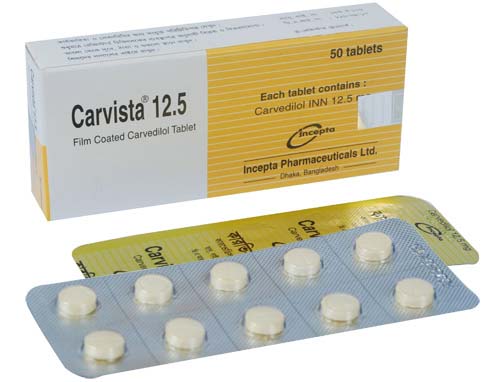 Carvedilol is indicated for the treatment of mild, moderate or severe heart failure of ischemic or cardiomyopathic origin, in conjunction with digitalis, diuretics and ACE inhibitor, to reduce the progression of disease as evidenced by cardiovascular death, cardiovascular hospitalization, or the need to adjust other heart failure medications. Carvedilol may be used in patients unable to tolerate an ACE inhibitor. Carvedilol may be used in patients who are not receiving digitalis, hydralazine or nitrate therapy.

Carvedilol is a cardiovascular drug whose main pharmacological action is non-selective antagonism of β-adrenergic receptors but which also possesses appreciable a-adrenergic antagonistic activity. It also has antiproliferative properties and is a scavenger of reactive free oxidant radicals. It is used in the treatment of hypertension, angina pectoris and congestive heart failure.

In hypertension: initially, 12.5 mg once daily, increased after 2 days to the usual dose of 25 mg once daily; if necessary the dose may be further increased at intervals of at least 2 weeks to maximum 50 mg daily in single or divided doses. In elderly patients, the initial dose of 12.5 mg daily may provide satisfactory control.

Rifampin: Pretreatment with rifampin resulted in a 60% decrease in Cmax and AUC.

Warfarin: Carvedilol did not alter the in vitro plasma protein binding of warfarin.

Clonidine: β-receptor antagonists potentiate the pressor reaction which may follow the sudden withdrawal of treatment with clonidine although, in theory, the a-blocking action of carvedilol should modify the pressure rise.

Take caution in hepatic impairment and in heart failure monitor clinical status for 2-3 hours after initiation and after increasing each dose. Before increasing dose ensure that the renal function and heart failure are not deteriorating