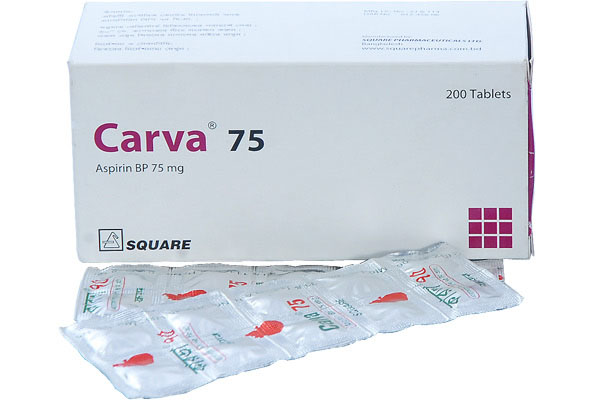 Aspirin is indicated in the following indications-

By decreasing platelet aggregation, Aspirin inhibits thrombus formation on the arterial side of the circulation, where thrombi are formed by platelet aggregation and anticoagulants have little effect. Aspirin is the analgesic of choice for headache, transient musculoskeletal pain and dysmenorrhoea. It has anti-inflammatory and antipyretic properties, which may be useful. Enteric-coated Aspirin reduces intestinal disturbance and gastrointestinal ulceration due to aspirin.

After myocardial infarction: Aspirin 150 mg daily for 1 month. Long-term use of aspirin in a dose of 75 mg daily is recommended thereafter.

Salicylates may enhance the effect of anticoagulants, oral hypoglycaemic agents, phenytoin and sodium valporate. They inhibit the uricosuric effect of probenecid and may increase the toxicity of sulphonamides. They may also precipitate bronchospasm or induce attacks of asthma in susceptible subjects.

Aspirin is contraindicated to the children (Reye's syndrome) less than 12 years, in breast-feeding and active peptic ulcer. It is also contraindicated in bleeding due to haemophilia, intracranial haemorrhage and other ulceration.

Side effects for the usual dosage of Aspirin are mild including nausea, dyspepsia, gastrointestinal ulceration and bronchospasm etc.

It is especially important not to use aspirin during the last 3 months of pregnancy unless specifically directed to do so by a doctor because it may cause problems in the unborn child or complications during delivery. Aspirin penetrates into breast milk. So, it should be administered with caution to lactating mothers.

Overdosage produces dizziness, tinnitus, sweating, nausea and vomiting, confusion and hyperventilation. Gross overdosage may lead to CNS depression with coma, cardiovascular collapse and respiratory depression. If the overdosage is suspected, the patient should be kept under observation for at least 24 hours, as symptoms and salicylate blood levels may not become apparent for several hours. Treatment of overdosage consists of gastric lavage and forced alkaline diuresis. Haemodialysis may be necessary in severe cases.

Keep all medicines out of reach of children. Store in a cool and dry place, protected from light