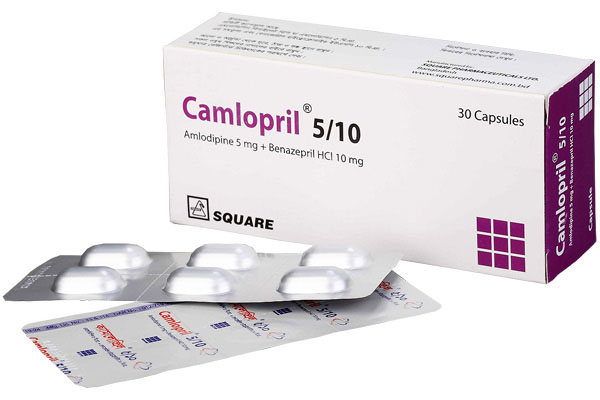 This is indicated for the treatment of hypertension.

Amlodipine is a dihydropyridine calcium antagonist which inhibits the transmembrane influx of calcium ions into vascular smooth muscle and cardiac muscle. It has greater effect on vascular smooth muscle cells than on cardiac muscle cells; Amlodipine is a peripheral arterial vasodilator that causes reduction in peripheral vascular resistance and reduction in blood pressure. Serum calcium concentration is not affected by Amlodipine.

Diuretics: Patients on diuretics may occasionally experience an excessive reduction of blood pressure after initiation of therapy with Amlodipine and Benazepril. Potassium-sparing diuretics (e.g. spironolactone) or potassium supplements can increase the risk of hyperkalemia.

Lithium: Increased serum lithium level and symptoms of lithium toxicity have been reported in patients receiving ACE inhibitors during therapy with lithium.

Amlodipine besylate and Benazepril hydrochloride combination is contraindicated in patients who are hypersensitive to benazepril, to any other ACE inhibitor, or to amlodipine.

Nursing Mothers: Minimal amounts of unchanged benazepril and of benazeprilat are excreted into the breast milk of lactating women treated with benazepril, so that a newborn child ingesting nothing but breast milk would receive less than 0.1% of the maternal doses of benazepril and benazeprilat. It is not known whether amlodipine is excreted in human milk. In the absence of this information, it is recommended that nursing be discontinued while this combination is administered.

Hyperkalemia: This may occur in only a few patients but generallyare reversible.

Patients With Hepatic Failure: Since Amlodipine is extensively metabolized by the liver and the plasma elimination half-life (t½) is 56 hours in patients with impaired hepatic function, caution should be exercised when administering Amlodipine & Benazepril to patients with severe hepatic impairment.

Cough: ACE inhibitor-induced cough should be considered in the differential diagnosis of cough.

Surgery/Anesthesia: In patients undergoing surgery or during anesthesia with agents that produce hypotension, Benazepril will block the angiotensin II formation that could otherwise occur secondary to compensatory renin release. Hypotension that occurs as a result of this mechanism can be corrected by volume expansion.

Carcinogenesis, Mutagenesis, Impairment of Fertility: No evidence of carcinogenicity, mutagenicity or impairment of fertility was found when the Benazepril/Amlodipine combination were given orally.

Pediatric Use: Safety and effectiveness in pediatric patients have not been established.

Geriatric Use: Clinical experience has not identified differences in responses between the elderly and younger patients, but greater sensitivity of some older individuals cannot be ruled out.

Store at 25°C, protect from moisture. Keep out of reach of children.