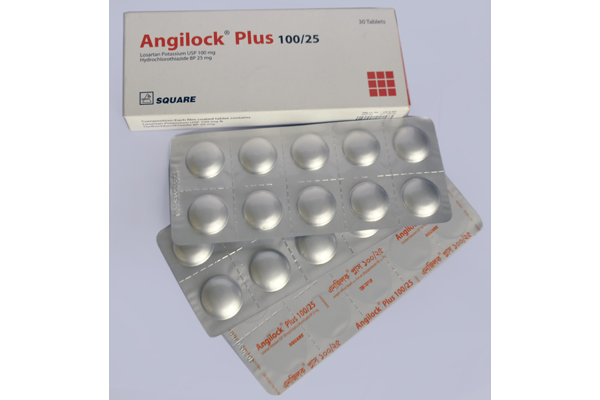 This is indicated for the treatment of hypertension. It is also indicated to reduce the risk of stroke in patients with hypertension and left ventricular hypertrophy.

Angiotensin II formed from angiotensin I in a reaction catalyzed by angiotensin converting enzyme (ACE), is a potent vasoconstrictor, the primary vasoactive hormone of the renin-angiotensin system and an important component in the pathophysiology of hypertension. It also stimulates aldosterone secretion by the adrenal cortex. Losartan and its principal active metabolite block the vasoconstrictor and aldosterone-secreting effects of angiotensin II by selectively blocking the binding of angiotensin II to the AT1 receptor found in many tissues, (e.g. vascular smooth muscle, adrenal gland). In vitro binding studies indicate that losartan is a reversible, competitive inhibitor of the AT1 receptor. Neither Losartan nor its active metabolite inhibits ACE (kinase II, the enzyme that converts angiotensin I to angiotensin II and degrades bradykinin); nor do they bind to or block other hormone receptors or ion channels known to be important in cardiovascular regulation.

Hydrochlorothiazide is a thiazide diuretic. Thiazides affect the renal tubular mechanisms of electrolyte reabsorption, directly increasing excretion of Sodium and Chloride in approximately equivalent amounts. Indirectly, the diuretic action of Hydrochlorothiazide reduces plasma volume, with consequent increases in plasma renin activity, increases in Aldosterone secretion, increases in urinary Potassium loss, and decreases in serum Potassium. The renin-aldosterone link is mediated by angiotensin II, so co-administration of an angiotensin II receptor antagonist tends to reverse the Potassium loss associated with these diuretics.

Losartan Potassium: No significant drug-drug pharmacokinetic interactions have been found in interaction studies with Hydrochlorothiazide, Digoxin, Warfarin, Cimetidine and Phenobarbital. As with other drugs that block angiotensin II or its effects, concomitant use of potassium-sparing diuretics (e.g. Spironolactone, Triamterene, Amiloride), potassium supplements, or salt substitutes containing potassium may lead to increase in serum potassium. As with other antihypertensive agents, the antihypertensive effect of Losartan may be blunted by the non-steroidal anti-inflammatory drug Indomethacin.

Hydrochlorothiazide: When administered concurrently, the following drugs may interact with Thiazide diuretics: alcohol, barbiturates, or narcotics-potentiation of orthostatic hypotension may occur.

Cholestyramine and colestipol resins: absorption of Hydrochlorothiazide is impaired in the presence of anionic exchange resins

Angiotensin-II receptor antagonists should be avoided in pregnancy unless essential. They may adversely affect fetal and neonatal blood pressure control and renal function; skull defects and oligohy dramnios have also been reported. Information on the use of angiotensin-II receptor antagonists in breastfeeding is limited. They are not recommended in breastfeeding and alternative treatment options, with better-established safety information during breastfeeding, are available.

Use in Patients with Renal Impairment: The usual regimens of therapy with 50/12.5 may be followed as long as the patient's creatinine clearance is >30 ml/min. In patients with more severe renal impairment, loop diuretics are preferred to thiazides. In that case, hydrochlorothiazide is not recommended.

Use in Patients with Hepatic Impairment: The combination of Losartan and Hydrochlorothiazide is not recommended for titration in patients with hepatic impairment because the appropriate 25 mg starting dose of Losartan cannot be given.

Losartan Potassium: Limited data are available in regard to overdosage in humans. The most likely manifestation of overdosage would be hypotension and tachycardia; bradycardia could occur from parasympathetic (vagal) stimulation. If symptomatic hypotension should occur, supportive treatment should be instituted. Neither losartan nor its metabolite can be removed by hemodialysis.

Hydrochlorothiazide: The most common signs and symptoms observed are those caused by electrolyte depletion (hypokalemia, hypochloremia, and dehydration resulting from excessive diuresis. If digitalis has also been administered, hypokalemia, may accentuate cardiac arrhythmias. The degree to which Hydrochlorothiazide is removed by hemodialysis has not been established.

Do not store above 30°C. Keep out of the reach of children.