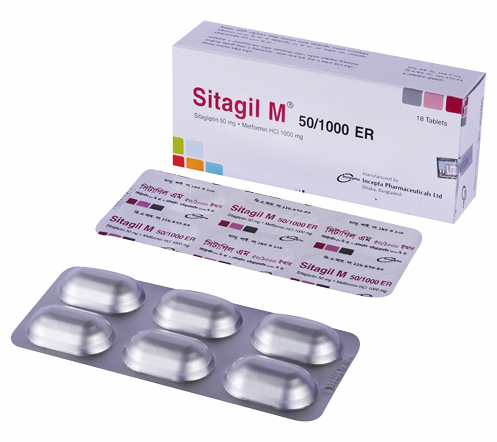 This is indicated as an adjunct to diet and exercise to improve glycemic control in adults with type 2 diabetes mellitus when treatment with both sitagliptin and metformin is appropriate. Important limitations of use:

This tablet combines two antihyperglycemic agents with complementary mechanisms of action to improve glycemic control in patients with type 2 diabetes. Sitagliptin, a dipeptidyl peptidase-4 (DPP-4) inhibitor, and Metformin HCl, a member of the biguanide class. Sitagliptin is a dipeptidyl peptidase-4 (DPP-4) inhibitor, which is believed to exert its actions in patients with type 2 diabetes by slowing the inactivation of incretin hormones. Incretin hormones, including glucagon-like peptide-1 (GLP-1) and glucose-dependent insulinotropic polypeptide (GIP), are released by the intestine throughout the day, and levels are increased in response to a meal. These hormones are rapidly inactivated by the enzyme, DPP-4. The incretins are part of an endogenous system involved in the physiologic regulation of glucose homeostasis. When blood glucose concentrations are normal or elevated then GLP-1 and GIP increase insulin synthesis and release from pancreatic beta cells by intracellular signaling pathways involving cyclic AMP. GLP-1 also lowers glucagon secretion from pancreatic alpha cells, leading to reduced hepatic glucose production. By increasing and prolonging active incretin levels, Sitagliptin increases insulin release and decreases glucagon levels in the circulation in a glucose-dependent manner. The pharmacologic mechanism of action of Metformin HCl is different from other classes of oral antihyperglycemic agents. Metformin HCl decreases hepatic glucose production, decreases intestinal absorption of glucose and increases peripheral glucose uptake and utilization.

Dose of film-coated tablet: The dosage of this tablet should be individualized on the basis of the patient's current regimen, efectiveness, and tolerability while not exceeding the maximum recommended daily dose of 100 mg sitagliptin and 2000 mg metformin. Initial combination therapy or maintenance of combination therapy should be individualized and left to the discretion of the health care provider.

This tablet should generally be given twice daily with meals, with gradual dose escalation, to reduce the gastrointestinal (GI) side efects due to metformin.

No studies have been performed specifcally examining the safety and efcacy of Sitagliptin Phosphate Monohydrate INN/Metformin Hydrochloride BP in patients previously treated with other oral antihyperglycemic agents and switched to Sitagliptin Phosphate Monohydrate INN/Metformin Hydrochloride BP. Any change in therapy of type 2 diabetes should be undertaken with care and appropriate monitoring as changes in glycemic control can occur.

Phenprocoumon: Metformin may decrease the anticoagulant effect of phenprocoumon. Therefore, close monitoring of the INR is recommended.

Levothyroxine: Levothyroxine can reduce the hypoglycemic effect of metformin. Monitoring of blood glucose levels is recommended, especially when thyroid hormone therapy is initiated or stopped, and the dosage of metformin must be adjusted if necessary.

This tablet is contraindicated in patients with:

This tablet should be temporarily discontinued in patients undergoing radiologic studies involving intravascular administration of iodinated contrast materials, because use of such products may result in acute alteration of renal function.

The most common adverse reactions reported in ≥5% of patients simultaneously started on sitagliptin and metformin and more commonly than in patients treated with placebo were diarrhea, upper respiratory tract infection, and headache.

Nasopharyngitis was the only adverse reaction reported in ≥5% of patients treated with sitagliptin monotherapy and more commonly than in patients given placebo.

The most common (>5%) adverse reactions due to initiation of metformin therapy are diarrhea, nausea/vomiting, fatulence, abdominal discomfort, indigestion, asthenia, and headache.

Pregnancy Category B. There are no adequate and well-controlled studies in pregnant women with Sitagliptin Phosphate Monohydrate INN/Metformin Hydrochloride BP or its individual components; therefore, the safety of Sitagliptin Phosphate Monohydrate INN/Metformin Hydrochloride BP in pregnant women is not known. This tablet should be used during pregnancy only if clearly needed.

Sitagliptin: In the event of an overdose, it is reasonable to employ the usual supportive measures, e.g., remove unabsorbed material from the gastrointestinal tract, employ clinical monitoring (including obtaining an electrocardiogram), and institute supportive therapy as indicated by the patient's clinical status. Sitagliptin is modestly dialyzable. Prolonged hemodialysis may be considered if clinically appropriate. It is not known if sitagliptin is dialyzable by peritoneal dialysis.

Metformin hydrochloride: Overdose of metformin hydrochloride has occurred, including ingestion of amounts greater than 50 grams. Metformin is dialyzable with a clearance of up to 170 mL/min under good hemodynamic conditions. Therefore, hemodialysis may be useful for removal of accumulated drug from patients in whom metformin overdosage is suspected. Pancreatitis may occur in the context of a metformin overdose.

Store below 25°C in a dry place away from light. Keep the medicines in a safe place, out of the reach of children. Do not use later than the date of expiry. To be dispensed only on the prescription of a registered physician.