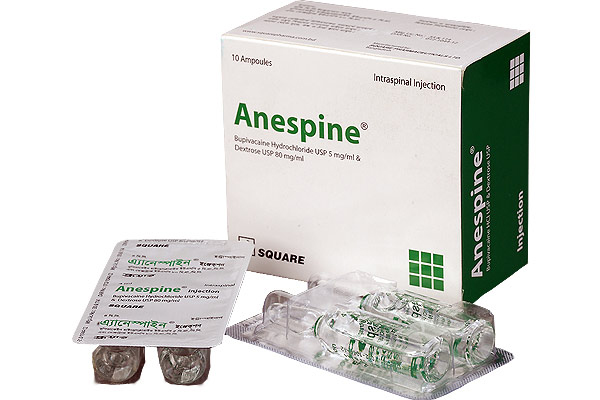 Bupivacaine Hydrochloride & Dextrose is indicated for-

Bupivacaineis a long acting anaesthetic agent of the amide type. Bupivacaine & Dextrosehas a rapid onset of action and long duration. The duration of analgesia in the T10-T12 segments is 2-3 hours. Bupivacaine Hydrochloride produces a moderate muscular relaxation of the lower extremities lasting 2-2.5 hours. The motor blockade of the abdominal muscles makes the solution suitable for performance of abdominal surgery lasting 45-60 minutes.

The doses recommended below should be regarded as a guide for use in the average adult. Spinal anaesthesia for surgery: 2-4 ml (10-20 mg Bupivacaine hydrochloride). The spread of anaesthesia obtained with Bupivacaine depends on several factors including the volume of the solutions and the position if the patients during and following the injection. When injected in the L3-L4 intervertebral space with the patient in the sitting position, 3 ml of Bupivacaine spreads to the T7- T10 spinal segments. With the patient receiving the injection in the horizontal position and then turned supine, the blockade spine spreads to T4-T7 spinal segments. It should be understood that the level of spinal anaesthetic can be unpredictable in a given patient.

Bupivacaine should be used with care in patients receiving antiarrhythmic drugs with local anaesthetic activity, as their toxic effects may be additive. Phenothiazines and Butyrophenones may reduce or reverse the pressor effect of epinephrine.

Bupivacaine in Dextrose is contraindicated in patients with a known hypersensitivity to it or to any local anaesthetic agent of the amide type. The following conditions preclude the use of spinal anaesthesia: Severe hemorrhage, severe hypotension or shock and arrhythmias, such as complete heart block, which severely restrict cardiac output,Local infection at the site of proposed lumbar puncture ,Septicemia.

The adverse reaction profile for Bupivacaine is similar to those for other long acting local anesthetics administered intrathecally. Adverse reactions caused by the drug are difficult to distinguish from the physiological effects of the nerve block (e.g. decrease in blood pressure, bradycardia, temporary urinary retention), events caused directly (e.g. nerve trauma) or indirectly (e.g. epidural abscess) by the needle puncture or events associated to cerebrospinal leakage (eg. postdural puncture headache).

It is reasonable to assume that a large number of pregnant women and women of child-bearing age have been given Bupivacaine. No specific disturbances to the reproductive process have so far been reported, e.g. no increased incidence of malformations. It should be noted that the dose should be reduced in patients in the late stages of pregnancy

With recommended doses, Bupivacaine enters breast milk in such small quantities that there is generally no risk of affecting the breast feed child. At maternal serum levels of up to 0.45 µg/ml produced by the epidural use of Bupivacaine for vaginal delivery, Bupivacaine could not be detected in breast milk during the first 24 hours after delivery (detection limit 0.02 µg/ml).

Bupivacaine should be given cautiously to the elderly, the debilitated patients and to children, to patients with epilepsy, respiratory impairment, impaired cardiac conduction, bradycardia, severe shock; porphyria; myasthenia gravis. Myocardial depression may be more severe and more resistant to treatment.

Use in children: Bupivacaine Hydrochloride is not recommended in patients younger than 18 years of age.

Use in elderly and renal impairment: Patients in poor general condition due to ageing or other compromising factors such as partial or complete heart conduction block, advanced liver or renal dysfunction require special attention, although regional anesthesia may be the optimal choice for surgery in these patients.

Store in a cool and dry place. Protect from light.