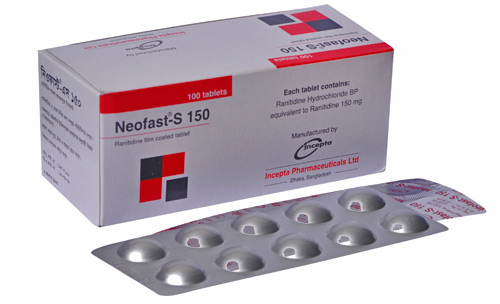 Ranitidine is indicated in:

Duodenal and gastric ulcer: The usual dosage is 150 mg twice daily taken in the morning and evening or 300 mg as a single daily dose at night for 4 to 8 weeks.

Zollinger Ellison syndrome: 150 mg 3 times daily and increased if necessary up to 6 g daily in divided doses. Dosage should be continued as long as clinically indicated.

Ranitidine injection may be given either as a slow (over a period of at least two minutes) intravenous injection of 50 mg, after dilution to a volume of 20 ml per 50 mg dose, which may be repeated every six to eight hours; or as an intermittent intravenous infusion at a rate of 25 mg per hour for two hours; the infusion may be repeated at six to eight hour intervals; or as an intramuscular injection of 50 mg (2 ml) every six to eight hours. In the prophylaxis of haemorrhage from stress ulceration in seriously ill patients or the prophylaxis of recurrent haemorrhage in patients bleeding from peptic ulceration, parenteral administration may be continued until oral feeding commences.

In the prophylaxis of upper gastrointestinal haemorrhage from stress ulceration in seriously ill patient sapriming dose of 50 mg as low as intravenous injection followed by a continuous intravenous infusion of 0.125-0.250 mg/kg/hour may be preferred. In patients considered to be at risk of developing aspiration syndrome Ranitidine injection 50 mg may be given intramuscularly or by slow intravenous injection 45 to 60 minutes before induction of general anaesthesia.

Children: The recommended oral dose for the treatment of peptic ulcer in children is 2 mg/kg to 4 mg/kg twice daily to a maximum of 300 mg ranitidine per day. Safety and effectiveness of Ranitidine injection have not been established in case of children.

Pregnancy: Ranitidine crosses the placenta. But there is no evidence of impaired fertility or harm to the foetus due to Ranitidine. Like other drugs, Ranitidine should only be used during pregnancy if considered essential.

Lactation: Ranitidine is excreted in human breast milk. Caution should be exercised when the drug is administered to a nursing mother.

Ranitidine should be given in reduced dosage to patients with impaired renal and hepatic function.

Use in elderly patients: In clinical trial the ulcer healing rates have been found similar in patients age 65 and over with those in younger patients. Additionally, there was no difference in the incidence of adverse effects.

Ranitidine is very specific in action and accordingly no particular problems are expected following overdosage with the drug. Symptomatic and supportive therapy should be given as appropriate. If required, the drug may be removed from the plasma by haemodiaiysis.

Patients with Zollinger-Ellison syndrome or other hypersecretory conditions: Ranitidine should be diluted to a concentration ≤2.5 mg/mL with dextrose 5% or NaCl 0.9%, lactated Ringer's, Na bicarbonate 5% soln.

Store in a cool and dry place. protect from light.