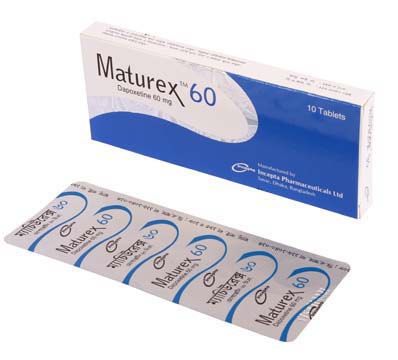 Indicated for the treatment of premature ejaculation (PE) in men 18 to 64 years of age, who have all of the following:

The mechanism of action is thought to be related to inhibition of neuronal reuptake of serotonin and subsequent potentiation of serotonin activity. The central ejaculatory neural circuit comprises spinal and cerebral areas that form a highly interconnected network. The sympathetic, parasympathetic, and somatic spinal centers, under the influence of sensory genital and cerebral stimuli integrated and processed at the spinal cord level, act in synergy to command physiologic events occurring during ejaculation. Experimental evidence indicates that serotonin (5-HT), throughout brain descending pathways, exerts an inhibitory role on ejaculation. To date, three 5-HT receptor subtypes 5-HT(1A), 5-HT(1B), and 5-HT(2C) have been postulated to mediate 5-HT's modulating activity on ejaculation.

Tamsulosin: Concomitant administration of single or multiple doses of 30 mg or 60 mg Dapoxetine to patients receiving daily doses of Tamsulosin did not result in changes in the pharmacokinetics of Tamsulosin. However, Dapoxetine should be prescribed with caution in patients who use alpha adrenergic receptor antagonists due to possible reduced orthostatic tolerance.

Warfarin: There are no data evaluating the effect of chronic use of Warfarin with Dapoxetine; therefore, caution is advised when Dapoxetine is used in patients taking Warfarin chronically.

Ethanol: Concomitant use of alcohol and Dapoxetine could increase the chance or severity of adverse reactions such as dizziness, drowsiness, slow reflexes, or altered judgment. Combining alcohol with Dapoxetine may increase these alcohol-related effects and may also enhance neurocardiogenic adverse events such as syncope, thereby increasing the risk of accidental injury; therefore, patients should be advised to avoid alcohol while taking Dapoxetine.

Dapoxetine is not indicated for use by women. It is not known either dapoxetine or its metabolites are excreted through human breast milk.

Patient with bleeding disorders, epilepsy, susceptibility to angle-closure glaucoma or raised intraocular pressure. Not intended for use in women. Known CYP2D6 poor metabolisers.

There were no unexpected adverse events in a clinical pharmacology study of Dapoxetine with daily doses up to 240 mg. In general, symptoms of overdose with SSRIs include serotonin-mediated adverse reactions such as somnolence, gastrointestinal disturbances such as nausea and vomiting, tachycardia, tremor, agitation and dizziness. In cases of overdose, standard supportive measures should be adopted as required.

Store below 30°C. Protect from light and moisture. Keep out of reach of children