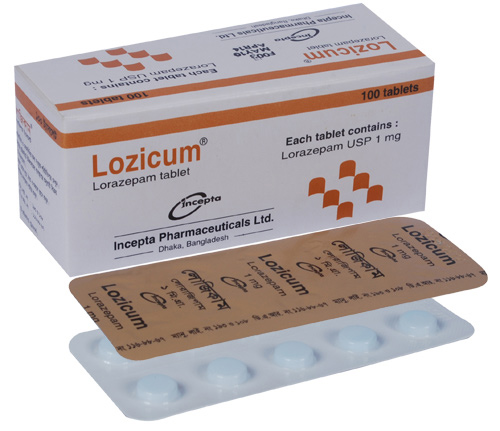 Lorazepam is used for the treatment of anxiety states; including anxiety associated with phobic & obsessional states, psychosomatic, organic or psychotic illness, insomnia associated with anxiety, nervousness, restlessness, nausea and vomiting related to chemotherapy and anticonvulsants, and as a premedicant before dental or general surgery or prior to investigative procedures where there may be discomfort. Lorazepam is not recommended in anxiety states in children but may be used as premedicant before surgery at a dose of 0.05 mg/Kg in children aged 5 to 13 years. The dosage of Lorazepam tablet should be increased gradually when needed to avoid adverse effects. When higher dosage is indicated, the evening dose should be increased before the daytime.

Lorazepam is a short-acting tranquilizer of the benzodiazepine group. It is an agonist at benzodiazepine receptors in the CNS. It exerts a depressant action on the CNS, which may be mediated by potentiating the inhibitory actions of GABA (gamma amino butyric acid) in the CNS. This will result in diminution of the ascending activating systems, particularly the serotonergic and noradrenergic pathway from brain stem or the mid-brain to the cerebral cortex.

Lorazepam is administered orally. For optimal results; dose, frequency of administration and duration of therapy should be individualized according to patient's response.

Lorazepam should not be given to patients with a previous sensitivity to benzodiazepines or with acute narrow-angle glaucoma and myasthenia gravis.

Adverse reactions are usually observed at the beginning of therapy and generally disappeared on continued medication or upon decreasing the dose. The most frequent adverse reactions of Lorazepam are sedation followed by dizziness, weakness and unsteadiness. Less frequent adverse reactions are disorientation, depression, nausea, change in appetite, headache, sleep disturbance, agitation, dermatological symptoms, eye-function disturbance, together with various gastrointestinal symptoms and autonomic manifestations.

Safety of Lorazepam in pregnancy has not been established. Because the use of this drug is rarely a matter of urgency, the use of Lorazepam during this period should almost always be avoided.

In patients with depression accompanying anxiety, a possibility for suicide should be borne in mind. For elderly or debilitated patients, the initial daily dosage should not exceed 2 mg in order to avoid over sedation. The usual precautions for treating patients with impaired renal or hepatic function and with acute and chronic pulmonary insufficiency should be observed. Use of Lorazepam for prolonged period and gastric patients requires caution and there should be frequent monitoring for symptoms of upper gastrointestinal disease. Machineries should be avoided during taking Lorazepam.

Overdosage of Lorazepam is usually manifested by varying degrees of central nervous system depression ranging from drowsiness to coma. In mild cases, symptoms include drowsiness, mental confusion and lethargy. In more serious cases and especially when other drugs or alcohol were ingested, symptoms may include ataxia, hypotonia, hypotension, hypnotic states (stages I to III), coma.