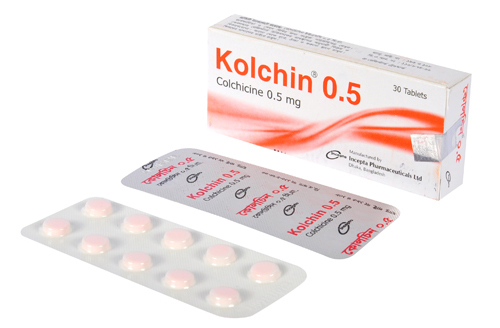 Colchicine are indicated for treatment of acute gout flares. And also indicated in Familial Mediterranean fever (FMF) in adults and children 4 years or older.

Colchicine is FDA-approved to help prevent gout and to treat sudden severe attacks of gout. In gout, crystals of uric acid are deposited in certain joints. White blood cells migrate to the areas of the body where uric acid has been deposited. They attempt to engulf the crystals, and as a result, lactic acid and pro-inflammatory enzymes are released. These substances give rise to the characteristic pain and swelling of gout. Colchicine inhibits the migration of the white blood cells into the inflamged area, causing a reduction in pain and inflammation.

An acute attack of gout apparently occurs as a result of an inflammatory reaction to crystals of monosodium urate that are deposited in the joint tissue from hyperuric body fluids; the reaction is aggravated as more urate crystals accumulate. Leukocytes migrate to the sites where urate crystals have been deposited and try to engulf the crystals by phagocytosis. As a result lactic acid and proinflammatory enzymes are released which cause inflammation with severe pain, redness, and swelling of the affected joint. Lactic acid favors a local decrease in pH that enhances uric acid deposition. Colchicine inhibits the phagocytosis of uric acid by leukocytes & also diminishes the lactic acid production directly. Thus interrupts the cycle of urate crystal deposition and inflammatory response that sustains the acute attack of gout.

Colchicine is absorbed when given orally, reaching a mean Cmax of 2.5 ng/mL (range 1.1 to 4.4 ng/mL) in 1 to 2 hours after a single dose administered under fasting conditions. The mean apparent volume of distribution is approximately 5 to 8 L/kg. Colchicine binding to serum protein is low (39 ± 5%), primarily to albumin regardless of concentration. CYP3A4 is involved in the metabolism of Colchicine to 2-O-demethylcolchicine and 3-O-demethylcolchicine. Plasma levels of these metabolites are minimal (less than 5% of parent drug). Following multiple oral doses (0.6 mg twice daily), the mean elimination half-life is 26.6 to 31.2 hours.

For prophylaxis during intercritical periods:

For prophylaxis against attacks of gout in patients undergoing surgery:

Co-administration of P-gp and/or CYP3A4 inhibitors (e.g., clarithromycin or cyclosporine) have been demonstrated to alter the concentration of Colchicine

Patients with renal or hepatic impairment should not be given Colchicine in conjunction with Permeability glycoprotein (P-gp) or strong CYP3A4 inhibitors (e.g., clarithromycin or cyclosporine).

Pregnancy Category C. There are no adequate and well-controlled studies with Colchicine in pregnant women. Colchicine is excreted into human milk. Caution should be exercised when administered to a nursing woman.

The exact dose of colchicine that produces significant toxicity is unknown. Fatalities have occurred after ingestion of a dose as low as 7 mg over a 4-day period, while other patients have survived after ingesting more than 60 mg. A review of 150 patients who overdosed on colchicine found that those who ingested less than 0.5 mg/kg survived and tended to have milder toxicities, such as gastrointestinal symptoms, whereas those who took 0.5 to 0.8 mg/kg had more severe reactions, such as myelosuppression.

Store below 30°C temperature. Protect from light and moisture. Keep the medicine out of reach of children.