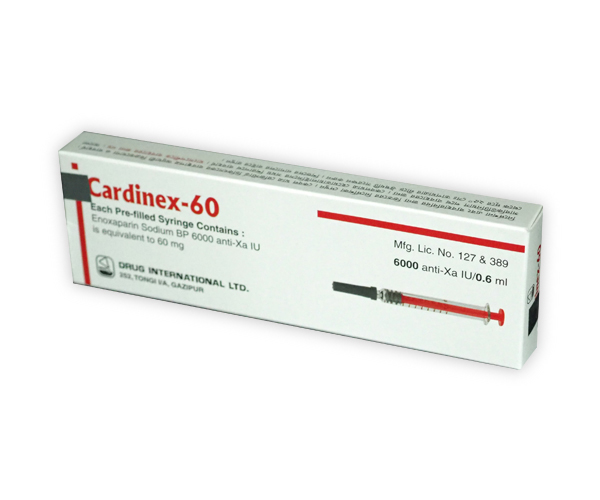 Enoxaparin is indicated in:

Enoxaparin is a low molecular weight heparin with anticoagulant properties. It acts by enhancing the inhibition rate of activated clotting factors including thrombin and factor Xa through its action on antithrombin III.

Prophylaxis of venous thromboembolism: In patients with a low to moderate risk of venous thromboembolism the recommended dosage is 20 mg (2,000 IU) once daily by subcutaneous injection for 7 to 10 days, or until the risk of thromboembolism has diminished. In patients undergoing surgery, the initial dose should be given approximately 2 hours pre-operatively. In patients with a higher risk, such as in orthopaedic surgery, the dosage should be 40 mg (4,000 IU) daily by subcutaneous injection with the initial dose administered approximately 12 hours before surgery.

Prophylaxis of venous thromboembolism in medical patients: The recommended dose of enoxaparin sodium is 40 mg (4,000 IU) once daily by subcutaneous injection. Treatment with enoxaparin sodium is prescribed for a minimum of 6 days and continued until the return to full ambulation, for a maximum of 14 days.

Treatment of venous thromboembolism: Enoxaparin should be administered subcutaneously as a single daily injection of 1.5 mg/kg (150 IU/kg). Enoxaparin treatment is usually prescribed for at least 5 days and until adequate oral anticoagulation is established.

Treatment of unstable angina and non-Q-wave myocardial infarction: The recommended dose is 1 mg/kg Enoxaparin every 12 hours by subcutaneous injection, administered concurrently with oral aspirin (100 to 325 mg once daily). Treatment with Enoxaparin in these patients should be prescribed for a minimum of 2 days and continued until clinical stabilisation. The usual duration of treatment is 2 to 8 days.

Treatment of acute ST-segment Elevation Myocardial Infarction: The recommended dose of enoxaparin sodium is a single IV bolus of 30 mg plus a 1mg/kg SC dose followed by 1 mg/kg administered SC every 12 hours (max 100mg for the first two doses only, followed by 1 mg/kg dosing for the remaining doses).

Prevention of extracorporeal thrombus formation during haemodialysis: A dose equivalent to 1 mg/kg (100 IU/kg) introduced into the arterial line at the beginning of a dialysis session is usually sufficient for a 4 hour session. If fibrin rings are found, such as after a longer than normal session, a further dose of 0.5 to 1 mg/kg (50 to 100 IU/kg) may be given. For patients at a high risk of haemorrhage the dose should be reduced to 0.5 mg/kg (50 IU/kg) for double vascular access or 0.75 mg/kg (75 IU/kg) for single vascular access.

It is recommended that agents which affect haemostasis should be discontinued prior to enoxaparin therapy unless their use is essential, such as: systemic salicylates, acetylsalicylic acid, NSAIDs including ketorolac, dextran, and clopidogrel, systemic glucocorticoids, thrombolytics and anticoagulants. If the combination cannot be avoided, enoxaparin should be used with careful clinical and laboratory monitoring

Patients with known hypersensitivity to Enoxaparin Sodium, heparin or other low molecular weight heparins. Patients with active major bleeding and conditions with a high risk of uncontrolled hemorrhage including recent hemorrhagic stroke.

Haemorrhage (bleeding), Thrombocytopenia, elevations of serum aminotransferase. Pain, bluish marks at injection sites to skin rash at injection sites. Cases of neuraxial hematomas with the concurrent use of Enoxaparin and spinal/epidural anesthesia or spinal puncture have resulted in varying degrees of neurologic injuries.

Pregnancy: Pregnancy category B. In humans, there is no evidence that Enoxaparin Sodium crosses the placental barrier. As there are no adequate and well-controlled studies in pregnant women, Enoxaparin Sodium should be used during pregnancy only if clearly needed. Pregnant women with mechanical prosthetic heart valves may be at a higher risk for thromboembolism.

Enoxaparin injection should not be administered by intramuscular route. Enoxaparin should be used with caution in conditions with increased potential for bleeding, such as impaired hemostasis, history of peptic ulcer, recent ischemic stroke, uncontrolled severe arterial hypertension, diabetic retinopathy, recent neuro or opthalmologic surgery and low weight patients. It is recommended that the platelet count be measured befored the initiation of the treatment and regularly thereafter during treatment.

Dose in Hepatic Impairment: Caution should be used in hepatically impaired patients.

Elderly: For treatment of acute ST-segment Elevation Myocardial Infarction in elderly patients 75 years of age, do not use an initial IV bolus. Initiate dosing with 0.75 mg/kg SC every 12 hours (maximum 75 mg for the first two doses only, followed by 0.75 mg/kg dosing for the remaining doses). For other indications, no dosage adjustments are necessary in the elderly, unless kidney function is impaired.

Children: Not recommended, as dosage not established.

Store in a cool and dry place, protect from light and moisture.Do not store above 25°C. Do not store in a refrigerator or freezer. Keep out of the reach of children