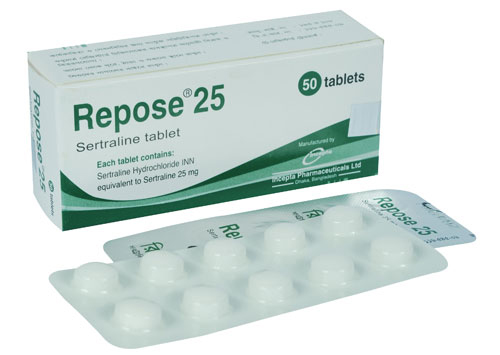 Sertraline has potent and selective inhibitory action on CNS neuronal reuptake of 5-HT resulting in increased 5-HT concentrations at the synaptic clefts, leading to facilitation of its sustained activity at the postsynaptic receptor sites. It ultimately results in an improvement of depression. Reduction of Serotonin turnover in brain by Sertraline is also another contributing fact implicated in its action. Its prolonged elimination half-life offers a benefit of once daily administration.

Sertraline is contraindicated in patients with a known hypersensitivity to Sertraline or any of the excipients of drug.

Pregnancy: Although animal studies did not provide any evidence of teratogenicity, the safety of Sertraline during human pregnancy has not been established.

Lactation: Sertraline is known to be excreted in breast milk. Its effects on the nursing infant have not yet been established. If treatment with Sertraline is considered necessary, discontinuation of breast-feeding should be considered.

Precaution should be taken in case of liver problems, kidney diseases, seizures, heart problems and any allergies. This drug may cause dizziness or drowsiness. Caution should be taken in activities requiring alertness such as driving or using machinery. Caution is advised while using this product in the elderly because they may be more sensitive to the effects of the drug. Do not take this drug if you have taken monoamine oxidase inhibitor in the last five weeks.