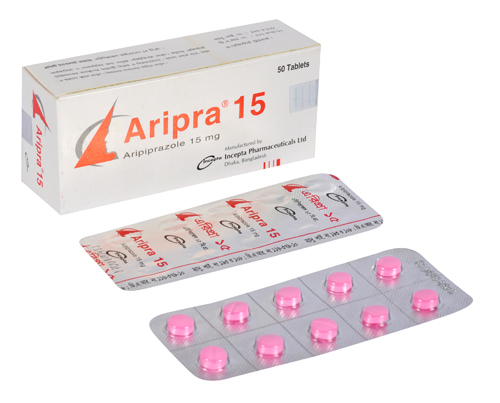 Aripiprazole is indicated for-

For Schizophrenia: 10 to 15 mg, once daily, without regard to food. Dose increment should not be made before 2 weeks, the time needed to achieve steady state.

For Bipolar mania: 30 mg, once daily, without regard to food.

Caution should be exercised when aripipazole is taken in combination with other centrally acting drugs and alcohol. Carbamazepine could cause an increase in aripiprazole clearance and lower blood levels. Ketoconazole, quinidine, fluoxetine or paroxetine can inhibit aripiprazole elimination and cause increased blood levels.

Aripiprazole is contraindicated in patients who are hypersensitive to it or to any component of this product.

Aripiprazole should not be used in pregnancy as no human trial is performed. Patients should be advised not to breast feed an infant if they are taking aripiprazole.

Aripiprazole may be associated with orthostatic hypotension (orthostatic lightheadedness).

Aripiprazole should be used with caution in patients with known cardiovascular disease (myocardial infarction or ischaemic heart disease, heart failure or conduction abnormalities), cerebrovascular disease, or conditions that would predispose patients to hypotension (dehydration, hypovolemia, and treatment with antihypertensive medications).

Seizures occurred in aripiprazole-treated patients. As with other antipsychotic drugs, aripiprazole should be used cautiously in patients with Alzheimer's dementia.

Aripiprazole is not approved for the treatment of patients with dementia-related psychosis.

Aripiprazole at doses up to 1080 mg causes no fatalities. The signs and symptoms observed with aripiprazole overdose included nausea, vomiting, asthenia, diarrhea, and somnolence.