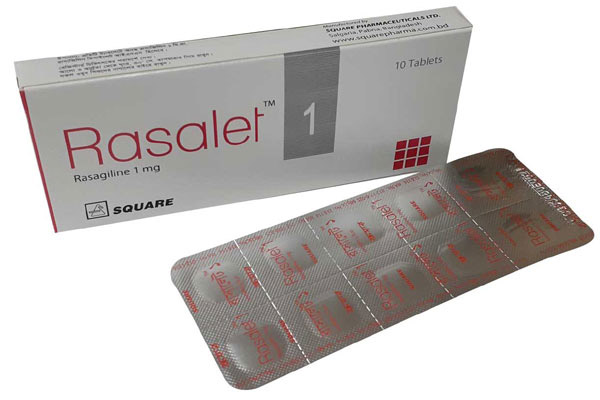 Rasagiline is indicated for the treatment of the signs and symptoms of idiopathic Parkinson's disease as initial monotherapy, and as adjunct therapy to dopamine agonists or to levodopa.

Rasagiline is a potent, irreversible, selective MAO-B inhibitor that effectively crosses the blood brain barrier after oral administration. The precise mechanisms of action of Rasagiline are unknown. One mechanism is believed to be related to its MAO-B inhibitory activity, which causes an increase in extracellular levels of dopamine in the brain. The elevated dopamine level and subsequent increased dopaminergic activity are likely to mediate Rasagiline's beneficial effects.

Concomitant use of Rasagiline with meperidine, dextromethorphan, antidepressants is not recommended.

Rasagiline is contraindicated for use with meperidine, tramadol, methadone, propoxyphene and MAO inhibitors (MAOIs), including other selective MAO-B inhibitors, because of risk of serotonin syndrome.

Pregnancy Category C. Rasagiline should be used during pregnancy only if the potential benefit justifies the potential risk to the fetus. It is not known whether this drug is excreted in human milk. So, caution should be exercised when administered to a nursing woman.

Exacerbation of hypertension may occur during treatment with Rasagiline. Medication adjustment may be necessary if elevation of blood pressure is sustained. Dose should not exceed 0.5 mg once daily for patients with mild hepatic impairment or taking concomitant Ciprofloxacin or other CYP1A2 inhibitors.

Pediatric use: The safety and effectiveness in pediatric patients have not been established.

Store below 30° c, protected from light and moisture. Keep all the medicines out of reach of children.