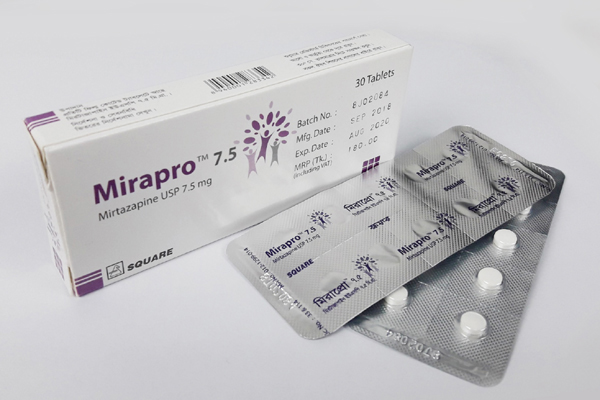 Mirtazapine Tablets are indicated for the treatment of major depressive disorder (MDD).

Pharmacokinetics: After oral administration of Mirtazapine tablets, the active constituent mirtazapine is rapidly and well-absorbed, reaching peak plasma levels after about 2 hours. Binding of mirtazapine to plasma proteins is approximately 85%. The mean half-life of elimination is 20-40 hours; (26 hours in males, 37 hours in females). The half-life of elimination is sufficient to justify once-a-day dosing. Mirtazapine displays linear pharmacokinetics within the recommended dose range. Mirtazapine is extensively metabolized and eliminated via the urine and faeces four days. Major pathways of biotransformation are demethylation and oxidation followed by conjugation.

Adult dose: The recommended starting dose for Mirtazapine tablets is 15 mg/day, administered in a single dose, preferably in the evening or prior to sleep. The effective dose range was generally 15 to 45 mg/day and the patients not responding to the initial 15 mg dose may benefit from dose increases up to a 30 mg to maximum of 45 mg/day. Mirtazapine has an elimination half-life of approximately 20 to 40 hours; therefore, dose changes should be made at intervals of less than 1 to 2 weeks in order to allow sufficient time for the therapeutic response to a given dose.

Patients, their families, and their caregivers should be encouraged to be alert to the emergence of anxiety, agitation, panic attacks, insomnia, irritability, hostility, aggressiveness, impulsivity, akathisia (psychomotor restlessness), hypomania, mania, other unusual changes in behavior, worsening of depression, and suicidal ideation, especially early during antidepressant treatment and when the dose is adjusted up or down. Patients who are to receive Mirtazapine should be warned about the risk of developing agranulocytosis. Mirtazapine may impair judgment, thinking, and particularly, motor skills, because of its prominent sedative effect. Clinically significant ALT (SGPT) elevations (≥3 times the upper limit of the normal range) may occur.

Keep away from light and moisture. Store below 30º C. Keep all medicine out of the reach of children.