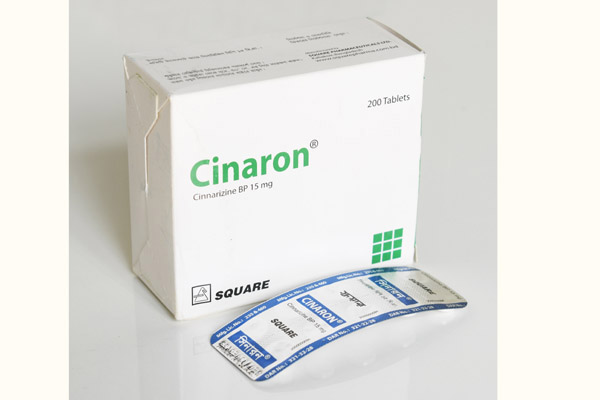 It is mainly used for the symptomatic treatment of nausea and vertigo due to Meniere's disease and other labyrinthine disturbances and for the prevention and treatment of motion sickness. It is also used in the management of various vascular disorders.

Cinnarizine's actions in the treatment of peripheral vascular disease are due to its anti-vasoconstrictor properties, its action on blood hyperviscosity and its anti-ischaemic effect. Anti-vasoconstriction is thought to be through a calcium blocker mechanism and is evident selectively in vascular smooth muscle. Increased peripheral muscle blood flow may be mediated by prevention of calcium entry into ischaemic erythrocytes, thereby prescribing flexibility.

No drug interactions have been seen with Cinnarizine when administered concomitantly with antihypertensives, diuretics, anticoagulants or hypoglycaemics.

There are no specific contraindications. It has been found to decrease blood pressure significantly. However, the drug should be used with reasonable caution in hypotensive patients.

Side effects such as somnolence and gastrointestinal disturbances are extremely rare. They are transient and may be readily prevented by achieving the optimal dosage gradually. Allergic skin reactions and fatigue have been reported on rare occasions. An aggravation or appearance of extrapyramidal symptoms has been reported extremely rarely in elderly people during prolonged therapy. The treatment should be reduced or stopped in such cases.

The safety of Cinnarizine in human pregnancy has not been established although studies in animals have not demonstrated teratogenic effects. Therefore, it is not advisable to administer Cinnarizine in pregnancy

Cinnarizine may cause drowsiness; patients affected in this way should not drive or operate machinery. Avoid alcoholic drink.