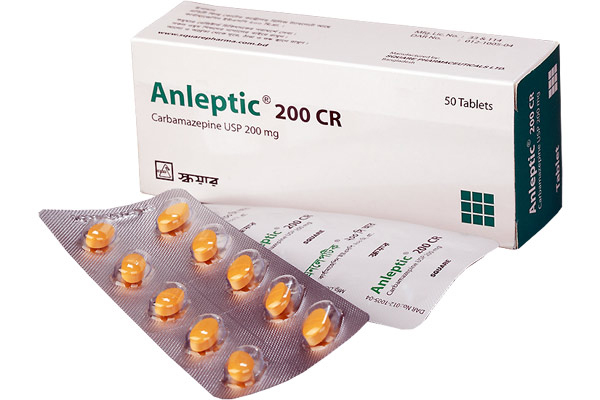 Carbamazepine is indicated for-

Carbamazepine depresses activity in the nucleus ventralis of the thalamus, reduces synaptic propagation of excitatory impulses or decreases summation of temporal stimulation leading to neural discharge by limiting influx of Na ions across cell membrane or other unknown mechanisms. It stimulates the release of antidiuretic hormone (ADH) and potentiates its action in promoting reabsorption of water.

Trigeminal Neuralgia: Initial: On the first day,either 100 mg b.i.d. for tablets or controlled release tablets, or 1/2 teaspoon q.i.d. for suspension, for a total daily dose of 200 mg. This daily dose may be increased by up to 200 mg/day using increments of 100 mg every 12 hours for tablets or controlled release tablets, or 50 mg (1/2 teaspoon) q.i.d. for suspension, only as needed to achieve freedom from pain. A total dose of 1200 mg daily shouldn't be exceeded. Maintenance: Control of pain can be maintained in most patients with 400-800 mg daily. However, some patients may be maintained on as little as 200 mg daily, while others may require as much as 1200 mg daily. At least once every 3 months throughout the treatment period, attempts should be made to reduce the dose to the minimum effective level or even to discontinue the drug. The tablets or syrup can be taken without regards to meal.

This medicine should not be used if anybody is allergic to one or any of its ingredients. It can not be used also in the following conditions:

The most severe adverse reactions have been observed in the hemopoietic system, the skin and the cardiovascular system.The most frequently observed adverse reactions, particularly during the initial phases of therapy, are dizziness, drowsiness, unsteadiness, nausea, and vomiting. This medicine may cause increased sensitivity to the sun. Exposure to the sun, sunlamps, or tanning booths should be avoided if the increased sensitivity is seen. A sunscreen or protective clothing may be helpful at outside for a prolonged period.

Pregnancy category D. Carbamazepine and its epoxide metabolite are transferred to breast milk. Because of the potential serious side effects, decision should me made whether to discontinue nursing or discontinue the drug.

This medicine may cause dizziness and drowsiness.Special care should be taken while performing potentially hazardous activities, such as driving or operating machinery.

This medicine may cause skin reactions. If any rash,skin peeling, itching, or other unexplained skin reaction is seen while taking this medicine the concerned doctor should be informed immediately.

This medicine may rarely cause liver problems.For this reason, consultation with doctor is needed if unexplained itching, yellowing of the skin or eyes, unusually dark urine, nausea and vomiting, abdominal pains, and loss of appetite or flu-like symptoms.

Carbamazepine decreases the blood levels of hormonal contraceptives containing estrogen and/or progesterone, which may make the contraceptive ineffective or result in breakthrough bleeding.

Women taking this medicine who require contraception should be prescribed a contraceptive containing at least 50 micrograms of oestrogen,or use non-hormonal methods of contraception, such as condoms.

Taking this medicine should not be stopped suddenly unless the doctor tells. Otherwise, as suddenly stopping treatment is likely to make the symptoms return.If this medicine is stopped, it should normally be done gradually, under the supervision of a specialist.

Caution should be taken in-