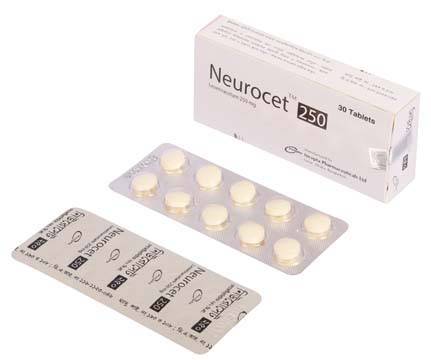 The precise mechanism(s) by which Levetiracetam exerts its antiepileptic effect is unknown. Levetiracetam showed only minimal activity in submaximal stimulation and in threshold tests. Protection was observed, however, against secondarily generalized activity from focal seizures induced by pilocarpine and kainic acid, two chemo convulsants that induce seizures that mimic some features of human complex partial seizures with secondary generalization. In vitro and in vivo recordings of epileptiform activity from the hippocampus have shown that Levetiracetam inhibits burst firing without affecting normal neuronal excitability, suggesting that Levetiracetam may selectively prevent hyper synchronization of epileptiform burst firing and propagation of seizure activity.

Pediatric population: The tablet formulation is not adapted for use in infants and children under the age of 6 years. Oral solution is the preferred formulation for use in this population. In addition, the available dose strengths of the tablets are not appropriate for initial treatment in children weighing less than 25 kg, for patients unable to swallow tablets or for the administration of doses below 250 mg. In all of the above cases, oral solution should be used.

The flm-coated tablets must be taken orally, swallowed with a sufcient quantity of liquid and may be taken with or without food. The daily dose is administered in two equally divided doses.

Probenecid: Probenecid (500 mg four times daily), a renal tubular secretion blocking agent, has been shown to inhibit the renal clearance of the primary metabolite but not of levetiracetam. Nevertheless, the concentration of this metabolite remains low.

Hypersensitivity to the active substance or other pyrrolidone derivatives or to any of the excipients.

Most common adverse reactions (incidence ≥ 5% more than placebo) include:

Levetiracetam is not recommended during pregnancy and in women of childbearing potential not using contraception unless clinically necessary. Levetiracetam is excreted in human breast milk. Therefore, breastfeeding is not recommended. However, if levetiracetam treatment is needed during breastfeeding, the benefit/risk of the treatment should be weighed considering the importance of breastfeeding. No impact on fertility was detected in animal studies. No clinical data are available, the potential risk for humans is unknown.

Paediatric population: The tablet formulation is not adapted for use in infants and children under the age of 6 years. Available data in children did not suggest an impact on growth and puberty. However, long term effects on learning, intelligence, growth, endocrine function, puberty and childbearing potential in children remain unknown.

Elderly (65 years and older): Adjustment of the dose is recommended in elderly patients with compromised renal function.

Renal impairment: The daily dose must be individualized according to renal function.

Somnolence, agitation, aggression, depressed level of consciousness, respiratory depression and coma were observed with levetiracetam overdoses. After an acute overdose, the stomach may be emptied by gastric lavage or by induction of emesis. There is no specifc antidote for levetiracetam. Treatment of an overdose will be symptomatic and may include haemodialysis. The dialyser extraction efficiency is 60 % for levetiracetam and 74% for the primary metabolite.

Store at a cool temperature (not exceeding 25°C) and dry place, protected from light.