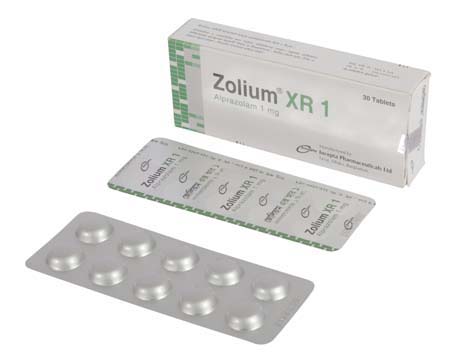 This drug is indicated for Anxiety disorder, Generalized Anxiety Disorder (GAD), Panic disorder with or without agoraphobia

Alprazolam binds with high affinity to the GABA benzodiazepine receptor complex. Considerable evidence suggests that the central pharmacologic or therapeutic actions of alprazolam are mediated via interaction with this receptor complex.

Alprazolam, a benzodiazepine, bind nonspecifically to benzodiazepine receptors BNZ1, which mediates sleep, and BNZ2, which affects muscle relaxation, anticonvulsant activity, motor coordination, and memory. As benzodiazepine receptors are thought to be coupled to gamma-aminobutyric acid-A (GABAA) receptors, this enhances the effects of GABA by increasing GABA affinity for the GABA receptor. Binding of the inhibitory neurotransmitter GABA to the site opens the chloride channel, resulting in a hyperpolarized cell membrane that prevents further excitation of the cell.

Must be individualized and carefully titrated in order to avoid excessive sedation or mental and motor impairment.

For Adults: Initially 0.25 mg given 2 or 3 times daily. If required, increases may be made in 0.25 mg increments according to the severity of symptoms and patient response.

It is recommended that the evening dose should be increased before the daytime doses. Very severe manifestations of anxiety may require larger initial daily doses. The optimal dosage is one that permits symptomatic control of excessive anxiety without impairment of mental and motor function. Exceptionally, it may be necessary to increase dosage to a maximum of 3 mg daily, given in divided doses.

For Elderly and Debilitated Patients: The initial dosage is 0.125 mg 2 or 3 times daily. If necessary, this dosage may be increased gradually depending on patient tolerance and response.

Alprazolam produces additive CNS depressant effects when co-administered with other psychotropic medications, anticonvulsants, antihistaminics, ethanol and other drugs which themselves produce CNS depression.

The most frequently reported are drowsiness, coordination difficulties with dizziness. Release of hostility and other paradoxical effects such as irritability, excitability and hallucinations are known to occur with the use of benzodiazepines.

Safety in pregnancy has not been established, therefore its use is not recommended. Studies have suggested an increased risk of congenital malformations associated with the use of the benzodiazepines, such as chlordiazepoxide, diazepam, and also meprobamate, during the first trimester of pregnancy. Since alprazolam is a benzodiazepine derivative, its administration is rarely justified in women of childbearing potential.

Studies in rats have indicated that Alprazolam and its metabolites are secreted into the milk. Therefore, nursing should not be undertaken while a patient is receiving the drug.

Elderly and debilitated patients, or those with organic brain syndrome, have been found to be prone to the CNS depressant activity of benzodiazepines even after low doses. Alprazolam is not recommended for use in patients whose primary diagnosis is psychosis or depression.

Use in Children: Safety and efficacy of Alprazolam in patients under the age of 18 years has not been established.

Symptom: Varying degrees of CNS depressant effects such as somnolence and hypnosis can occur. Other manifestations may include muscle weakness, ataxia, dysarthria and particularly in children paradoxical excitement. In more severe cases diminished reflexes, confusion and coma may ensue. It should be remembered when treating an overdose that multiple agents may have been ingested. Fatalities with benzodiazepines rarely occur except when other drugs, alcohol or aggravating factors are involved.

Management: Vomiting may be induced if the patient is fully awake. Vital signs should be monitored and general supportive measures should be employed as indicated. Gastric lavage should be instituted as soon as possible. I.V. fluids may be administered and an adequate airway should be maintained.

Alprazolam tablets should be stored in a cool and dry place, protected from light and moisture.