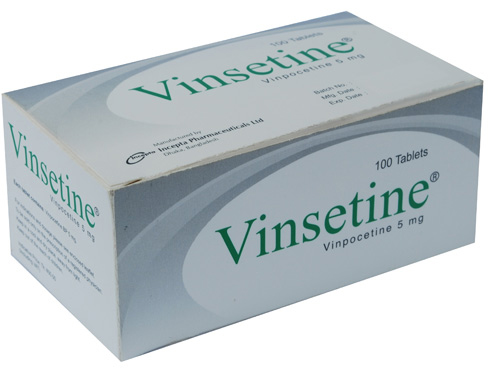 Ophthalmology: It can be used for the treatment of vascular disorders of the choroid and retina due to arteriosclerosis, vasospasm, macular degeneration, arterial or venous thrombosis or embolism, and glaucoma secondary to the above mentioned disorders.

For the treatment of vasovegetative symptoms of climacteric syndrome.

It selectively and intensely increases cerebral blood flow and the share of the brain in cardiac output, it reduces cerebral vascular resistance without affecting systemic circulation (blood pressure, heart rate, cardiac output, total peripheral resistance). It does not elicit steal phenomenon; on the contrary, it primarily improves the blood supply of the injured and ischaemic area while it remains unchanged in the intact areas (inverse steal effect). It further increases blood flow which is already increased as a result of hypoxia.

Slight changes in prothrombin time have been noted in those adding Vinpocetine to Warfarin dosing. The changes appear minimal. There are no other interactions reported so far. Therefore, it can be applied in combinations.

Vinpocetine is well tolerated. In some cases transient fall of blood pressure and tachycardia may occur.

Because Vinpocetine can reduce the ability of blood to clot, those individuals with a tendency to bleed should avoid Vinpocetine.

Store in a cool and dry place, protected from light and moisture.