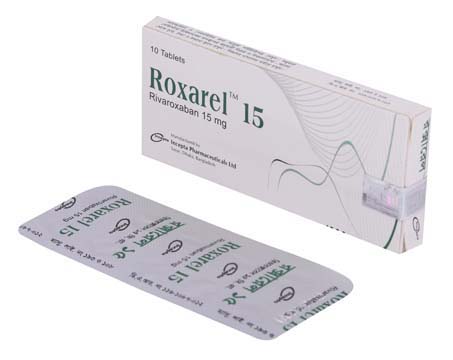 Rivaroxaban is a highly selective direct factor Xa inhibitor. Inhibition of factor Xa interrupts the intrinsic and extrinsic pathway of the blood coagulation cascade, inhibits thrombin formation. Rivaroxaban does not inhibit thrombin (activated factor II) and no effects on platelets have been demonstrated.

May be taken with or without food.

Concomitant use with drugs that are combined P-gp and CYP3A4 inhibitors (ketoconazole, ritonavir, clarithromycin, erythromycin, fluconazole, diltiazem, verapamil, dronedarone) increases in Rivaroxaban exposure and pharmacodynamic effects (i.e., factor Xa inhibition and PT prolongation), that’s why should be avoided. Co-administration of Rivaroxaban with a combined P-gp and strong CYP3A4 inducer (e.g., rifampicin, phenytoin, carbamazepine) decreases the efficacy of Rivaroxaban and also should be avoided. The concomitant use of other drugs like anti-platelet agents, heparin, fibrinolytic therapy, NSAIDs may cause an increased risk of bleeding.

The most common side effects of Rivaroxaban have increased chance of bleeding, spinal or epidural hematoma and increased risk of stroke after discontinuation in nonvalvular atrial fibrillation.

Early discontinuation of Rivaroxaban, in the absence of adequate alternative anticoagulation increases the risk of thrombotic events. Rivaroxaban increases the risk of bleeding that can be fatal in presence of following risk factors- bleeding disorders, uncontrolled severe arterial hypertension, gastrointestinal disease (e.g., inflammatory bowel disease, oesophagitis, gastritis and gastroesophageal reflux disease), vascular retinopathy, bronchiectasis, history of pulmonary bleeding. Signs or symptoms of neurological impairment should be monitored in case of neuraxial anesthesia (spinal/epidural anesthesia) or spinal puncture as epidural or spinal hematoma can occur. Rivaroxaban is not recommended in patients with pulmonary embolism who present with hemodynamic instability or who may receive thrombolysis or pulmonary embolectomy.

Overdose of Rivaroxaban may lead to hemorrhage. Rivaroxaban systemic exposure is not further increased at single doses >50 mg due to limited absorption. A specific antidote for Rivaroxaban is not available. The use of activated charcoal to reduce absorption in case of Rivaroxaban overdose may be considered. Partial reversal of laboratory anticoagulation parameters may be achieved with use of plasma products.

Store in a cool (below 30°C) & dry place protected from light. Keep away from the reach of children.