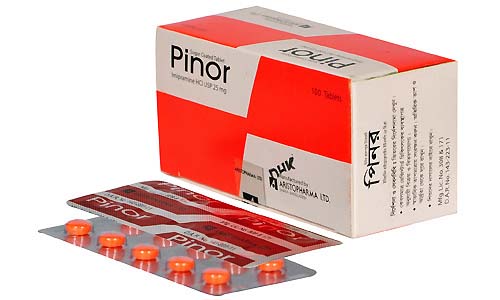 Imipramine Hydrochloride is indicated in-

Imipramine hydrochloride is an original tricyclic antidepressant, a member of the dibenzazepine group of compounds. The mechanism of action of Imipramine is not definitely known. However, it does not act primarily by stimulation of the central nervous system. The clinical effect is hypothesized as being due to the potentiation of adrenergic synapses by blocking uptake of norepinephrine at nerve endings. The mode of action of the drug in controlling childhood enuresis is thought to be apart from its antidepressant effect.

Period of treatment (including gradual withdrawal): 3 months-full physical examinations before the further course.

Methylphenidate may increase the effects of imipramine. This is usually avoided by reducing the dosage of imipramine. Imipramine may increase the depressant action of alcohol. Dangerously high blood pressure has resulted from the combination of imipramine, and members of monoamine oxidase (MAO) inhibitors. Because of this, imipramine should never be taken in combination with MAO inhibitors. Patients taking any MAO inhibitors, for example phenelzine sulfate or tranylcypromine sulfate, should stop the MAO inhibitor then wait at least 14 days before starting imipramine or any other tricyclic antidepressant. The same holds true when discontinuing imipramine and starting an MAO inhibitor. The anticholinergic (drying out) effects of imipramine are additive with other anticholinergic drugs such as benztropine, biperiden, trihexyphenidyl, and antihistamines.

The most frequent of side effects are dry mouth, constipation, urinary retention, increased heart rate, sedation, irritability, dizziness, and decreased coordination. Dry mouth, if severe to the point of causing difficulty speaking or swallowing, may be managed by dosage reduction or temporary discontinuation of the drug. Imipramine usage has been linked to both increases and decreases in blood pressure and heart rate. Heart attacks, congestive heart failure, and strokes have been reported. Confusion, disorientation, delusions, insomnia, and anxiety have also been reported as side effects in a small percentage of people taking imipramine. Problems associated with the skin (loss of sensation, numbness and tingling, rashes, spots, itching and puffiness), seizures, and ringing in the ears have also been reported. Nausea, vomiting, loss of appetite, diarrhea, and abdominal cramping are all side effects associated with imipramine usage in a small number of people.

Pregnancy category D. Limited data suggest that imipramine is likely to be excreted in human breast milk. Known risk of damage to fetus.

Imipramine should be used cautiously and with close physician supervision in people, especially the elderly, who have benign prostatic hypertrophy, urinary retention, and glaucoma, especially angle-closure glaucoma. The sedative effect is increased when imipramine is taken with other central nervous system depressants, such as alcoholic beverages, sleeping medications, other sedatives, or antihistamines. Imipramine may increase heart rate and stress on the heart. It may be dangerous for people with cardiovascular disease, especially those who have recently had a heart attack, to take this drug or other antidepressants in the same pharmacological class. Older people and persons with a history of heart disease may develop heart arrhythmias, heart conduction abnormalities, congestive heart failure, heart attack, abnormally rapid heart rates and strokes. Until a therapeutic dosage has been determined, people starting imipramine should be closely watched for signs of suicide. The risk of suicide is increased when imipramine is taken in overdose or combined with alcohol. Manic episodes and the emergence of symptoms of pre-existing psychotic states have been reported when imipramine therapy is started.

Children have been reported to be more sensitive than adults to an acute overdosage of imipramine. An acute overdose in infants or young children must be considered serious and potentially fatal.