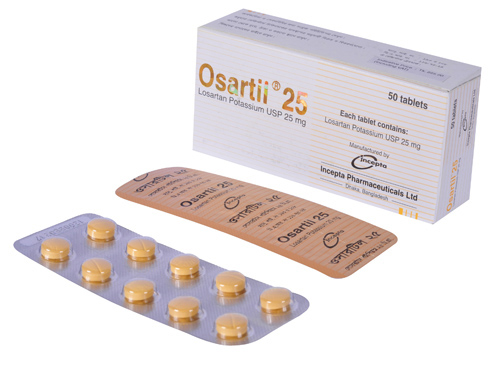 Hypertension: Losartan Potassium is indicated for the treatment of hypertension. It may be used alone or in combination with other antihypertensive agents (eg. thiazide diuretics).

Renal Protection in Type-2 Diabetic Patients with Proteinuria: Losartan Potassium is indicated to delay the progression of renal disease in hypertensive type-2 diabetics with proteinuria, defined as urinary albumin to creatinine ratio >300 mg/g.

Losartan Potassium is the first non-peptide orally active angiotensin II receptor blocker. It binds to the AT1 receptor found in many tissues (e.g. vascular smooth muscle, adrenal gland, kidneys and the heart) and reduces several important biological actions including vasoconstriction and the release of aldosterone responsible for hypertension.

The usual starting and maintenance dose is 50 mg once daily for most patients. If the antihypertensive effect using 50 mg once daily is inadequate, 25 mg twice daily is recommended prior to increasing the dose. For patients with intravascular volume-depletion (e.g., those treated with high-dose diuretics), a starting dose of 25 mg once daily should be considered. Losartan Potassium can be administered once or twice daily. The total daily dose ranges from 25 mg to 100 mg.

Rifampicin and fluconazole reduce levels of active metabolite of Losartan Potassium. Concomitant use of Losartan Potassium and hydrochlorothiazide may lead to potentiation of the antihypertensive effects. Concomitant use of potassium-sparing diuretics (eg, spironolactone, triamterene, amiloride), potassium supplements or salt substitutes containing potassium may lead to increases in serum potassium. The antihypertensive effect of losartan may be attenuated by the non-steroidal anti-inflammatory drug indomethacin. The use of ACE-inhibitor, angiotensin receptor antagonist, an anti-inflammatory drug and a thiazide diuretic at the same time increases the risk of renal impairment.

The side effects with the use of Losartan Potassium are mild and transient in nature. The most common side effects are dizziness, diarrhea, nasal congestion, cough, upper respiratory infection. Other side effects are fatigue, oedema, abdominal pain, chest pain, nausea, headache & pharyngitis.

Pregnancy Category D. The risk to the fetus increases if Losartan Potassium is administered during the second or third trimesters of pregnancy. It is not known whether Losartan Potassium is excreted in human milk, as many drugs are excreted in human milk and because of the potential for adverse effects on the nursing infant, a decision should be made whether to discontinue nursing or discontinue the drug, taking into account the importance of the drug to the mother.

Use of Losartan Potassium during the second and third trimesters of pregnancy reduces fetal renal function and increases fetal and neonatal morbidity and death. In patients who are intravascularly volume-depleted (e.g., those treated with high-dose diuretics), symptomatic hypotension may occur. Plasma concentration of Losartan Potassium is significantly increased in cirrhotic patients. Changes in renal function including renal failure have been reported in renal impaired patient.

keep in a dry place away from light and heat. Keep out of the reach of children.