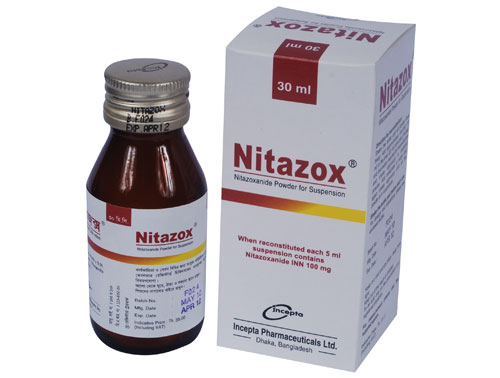 Nitazoxanide is indicated in diarrhoea caused by Cryptosporidium parvum and Giardia lamblia, Amebiasis and helminth infections.

Nitazoxanide, a synthetic antiprotozoal agent. Nitazoxanide is well absorbed from GIT. It interferes with the Pyruvate Ferredoxin Oxidoreductase (PFOR) enzyme dependent electron transfer reaction which is essential to anaerobic glucose energy metabolism. This results in cell swelling, membrane damage resulting in dysfunction of the parasite.

The suspension or tablet should be taken with food.

Nitazoxanide is highly bound to plasma protein (>99.9%). Therefore, caution should be used when administering Nitazoxanide concurrently with other highly plasma-protein bound drugs.

Known hypersensitivity to Nitazoxanide or any other ingredient in the formulations

Nitazoxanide is generally well tolerated. However abdominal pain, diarrhoea vomiting and headache have been reported rarely

Pregnancy category B. This drug should be used during pregnancy only if clearly needed.

Nitazoxanide should be administrated with caution to patients with hepatic, renal and biliary disease.

Information on Nitazoxanide overdosage is not available. Single oral doses of up to 4000 mg Nitazoxanide have been administered to healthy adult volunteers without significant adverse effects.

Paediatric Use: Safety and effectiveness of Nitazoxanide for Oral Suspension in paediatric patients less than one year of age have not been studied.

Store in a cool and dry place, away from light and moisture. Once reconstituted suspension should be used within 7 days.