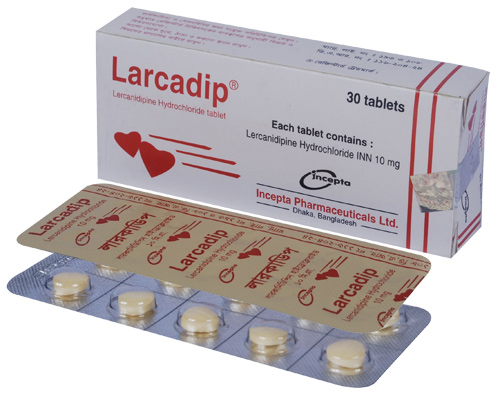 Lercanidipine is indicated for the treatment of mild to moderate essential hypertension.

Lercanidipine is a selective calcium channel blocker of the dihydropyridine group and it inhibits the transmembrane influx of calcium into smooth muscle. The mechanism of its antihypertensive action is due to a direct relaxant effect on vascular smooth muscle, thus lowering total peripheral resistance. Lercanidipine is endowed with a prolonged antihypertensive activity because of its high membrane partition coefficient and is devoid of negative inotropic effects due to its high vascular selectivity.

Use in the elderly: The recommended dosage is 10 mg orally once a day at least 15 minutes before meals; the dose may be increased to 20 mg depending on the individual patient's response. It may take about 2 weeks before the maximal antihypertensive effect is apparent.

Some individuals, not adequately controlled on a single antihypertensive agent, may benefit from the addition of Lercanidipine to therapy with a beta-adrenoceptor blocking drug (atenolol), a diuretic (hydrochlorothiazide) or an ACE inhibitor (ramiprii).

Use in children: Since there is no clinical data in patients under the age of 18 years, use in children is not currently recommended.

Concomitant treatment of Lercanidipine with cyclosporin, phenytoin, carbamazepine, rifampicin, ketoconazole, itraconazole, ritonavir, erythromycin, troleandomycin, and midazolam should be avoided. Caution should be exercised when Lercanidipine is co-prescribed with astemizole, amiodarone, quinidine, cimetidine, metoprolol and simvastatin.

Lercanidipine is contraindicated in patients with left ventricular outflow tract obstruction, untreated congestive cardiac failure, unstable angina pectoris, within 1 month of a myocardial infarction and known hypersensitivity to any dihydropyridine. Lercanidipine should not be taken with grapefruit juice.

Treatment with Lercanidipine is generally well tolerated. The most common side effects are related to the vasodilatory properties of Lercanidipine such as flushing, peripheral edema, headache, dizziness and asthenia. Other side effects, which occurred in less than 1% of patients include fatigue; Gl disturbances such as dyspepsia, nausea, vomiting, epigastric pain and diarrhea, polyurea, rash, somnolence and myalgia.

Special care should be exercised when Lercanidipine is used in patients with sick sinus syndrome, left ventricular dysfunction and ischaemic heart disease.

There is no data with Lercanidipine overdosage. As with other dihydropyridines, overdosage might be expected to cause excessive peripheral vasodilation with marked hypotension and reflex tachycardia. Since the drug is highly lipophilic, it is most probable that plasma levels are no guide to the duration of the period of risk and dialysis may not be effective.