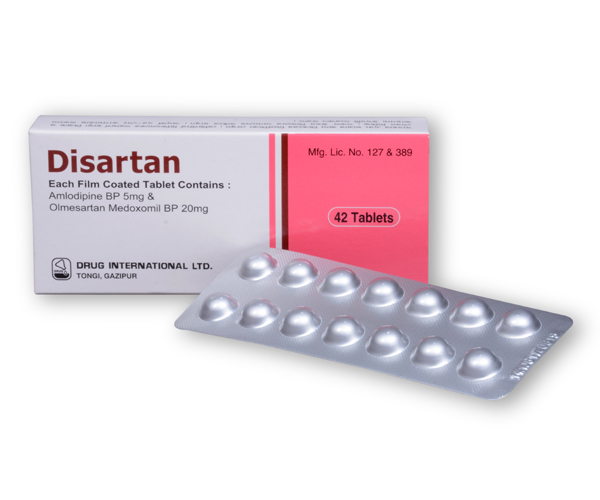 Angiotensin II formed from angiotensin I in a reaction catalyzed by angiotensin-converting enzyme (ACE), is a potent vasoconstrictor, the primary vasoactive hormone of the Renin-angiotensin system and an important component in the pathophysiology of hypertension. It also stimulates aldosterone secretion by the adrenal cortex.

Initial therapy: Initiate with 5/20 mg once daily for 1 to 2 weeks and titrate as needed up to a maximum of 10/40 mg once daily. Due to decreased clearance of Amlodipine among elderly patients the recommended starting dose of Amlodipine is 2.5 mg in patients 75 years. The lowest dose of the combination is 5/20 mg; therefore, initial therapy with this combination drug is not recommended in patients >75 years old.

The antihypertensive effect of angiotensin II receptor antagonists, including Olmesartan Medoxomil may be attenuated by NSAIDs including selective COX-2 inhibitors. Blood pressure, renal function and electrolytes should be closely monitored in patients on combination therapy and other agents that affect the RAS.

Cannot be co-administered with Aliskiren in patients with diabetes.

The most common side effects include peripheral edema, headache, flushing, and dizziness. It can also cause Intestinal problems known a sprue-like enteropathy.

Pregnancy Category D. Amlodipine and Olmesartan Medoxomil combination should not be used in 2nd and 3rd trimester because it can cause fetal death. When pregnancy is detected this combination should be discontinued as soon as possible. It is not known whether Olmesartan and Amlodipine are excreted in human milk. Because of the potential for adverse effects on the nursing infant, a decision should be made whether to discontinue nursing or discontinue the drug, taking into account the importance of the drug to the mother.

Pediatric use: The safety and effectiveness have not been established in pediatric patients.
Geriatric use: No overall differences in safety or effectiveness were observed between subjects 65 years of age or older and younger subjects.
Renal impairment: There are no studies in patients with renal impairment.
Hepatic impairment: Initial therapy is not recommended in hepatically impaired patients.

There is no information on over dosage in humans.

Do not store above 30°C. Keep away from light and out of the reach of children.