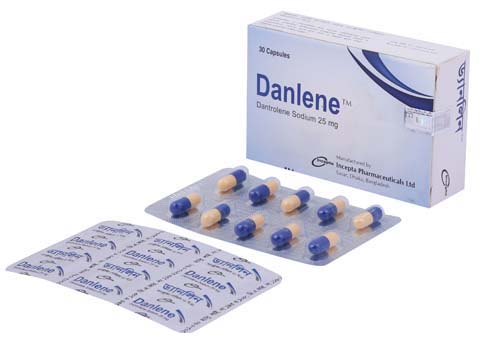 In Chronic Spasticity: Dantrolene is indicated in controlling the manifestations of clinical spasticity resulting from upper motor neuronal disorders (e.g., spinal cord injury, stroke, cerebral palsy, or multiple sclerosis). It is of particular benefit to the patients whose functional rehabilitation has been retarded by the sequelae of spasticity. Such patients must have presumably reversible spasticity where relief of spasticity will aid in restoring residual function. Dantrolene is not indicated in the treatment of skeletal muscle spasm resulting from rheumatic disorders. Occasionally, subtle but meaningful improvement in spasticity may occur with Dantrolene therapy. In such instances, information regarding improvement should be solicited from the patient. Brief withdrawal of Dantrolene for a period of 2 to 4 days will frequently demonstrate exacerbation of the manifestations of spasticity and may serve to confirm a clinical impression.

A decision to continue the administration of Dantrolene on a long-term basis is justified if introduction of the drug into the patient's regimen:

Dantrolene produces relaxation by affecting the contractile response of the skeletal muscle at a site beyond the myoneural junction, directly on the muscle itself. In skeletal muscle, Dantrolene dissociates the excitation-contraction coupling, probably by interfering with the release of Ca++ from the sarcoplasmic reticulum.

For Use in Chronic Spasticity:

Drowsiness may occur with Dantrolene therapy, and the concomitant administration of CNS depressants such as sedatives and tranquilizing agents may result in further drowsiness. Hepatotoxicity has occurred more often in women over 35 years of age receiving concomitant estrogen therapy.

Active hepatic disease, such as hepatitis and cirrhosis.

The most frequently occurring side effects of Dantrolene have been drowsiness, dizziness, weakness, general malaise, fatigue, and diarrhea. These are generally transient, occurring early in treatment, and can often be obviated by beginning with a low dose and increasing dosage gradually until an optimal regimen is established. Diarrhea may be severe and may necessitate temporary withdrawal of Dantrolene therapy. If diarrhea recurs upon readministration of Dantrolene, therapy should probably be withdrawn permanently

In view of the potential for liver damage in long-term Dantrolene use, therapy should be stopped if benefits are not evident within 45 days. Patients should be cautioned against driving a motor vehicle or participating in hazardous occupations while taking Dantrolene. Caution should be exercised in the concomitant administration of tranquilizing agents. Dantrolene might possibly evoke a photosensitivity reaction; patients should be cautioned about exposure to sunlight while taking it. It is important to recognize that fatal and non-fatal liver disorders of an idiosyncratic or hypersensitivity type may occur with Dantrolene therapy. At the start of Dantrolene therapy, it is desirable to do liver function studies (SGOT, SGPT, alkaline phosphatase, total bilirubin) for a baseline or to establish whether there is preexisting liver disease. Liver function studies (e.g., SGOT or SGPT) should be performed at appropriate intervals during Dantrolene therapy. Some patients have revealed a return to normal laboratory values in the face of continued therapy while others have not. If symptoms compatible with hepatitis, accompanied by abnormalities in liver function tests or jaundice appear, Dantrolene should be discontinued. If caused by Dantrolene and detected early, the abnormalities in liver function characteristically have reverted to normal when the drug was discontinued. Dantrolene therapy has been reinstituted in a few patients who have developed clinical and/ or laboratory evidence of hepatocellular injury. If such reinstitution of therapy is done, it should be attempted only in patients who clearly need Dantrolene and only after previous symptoms and laboratory abnormalities have cleared. The patient should be hospitalized and the drug should be restarted in very small and gradually increasing doses. Laboratory monitoring should be frequent and the drug should be withdrawn immediately if there is any indication of recurrent liver involvement. Dantrolene should be used with particular caution in females and in patients over 35 years of age in view of apparent greater likelihood of drug-induced, potentially fatal, hepatocellular disease in these groups.

Store in a cool & dry place, protected from light.