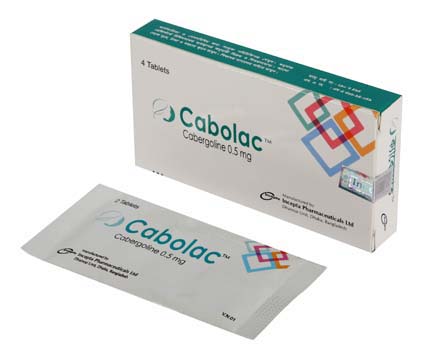 It is indicated for the treatment of hyperprolactinemic disorders, either idiopathic or due to pituitary adenomas. It is used to stop breast milk production (lactation) soon after childbirth, stillbirth, abortion or miscarriage. It can also be used to treat other conditions caused by hormonal disturbance which can result in high levels of prolactin being produced. This includes high levels of prolactin caused by tumours of the pituitary gland in both men and women.

Cabergoline is a long-acting dopamine receptor agonist with a high affinity for D2 receptors. It works by reducing the amount of prolactin that is released from pituitary gland. Results of in vitro studies demonstrate that Cabergoline exerts a direct inhibitory effect on the secretion of prolactin.

The recommended dosage of Cabergoline Tablet for initiation of therapy is 0.25 mg twice a week. Dosage may be increased by 0.25 mg twice weekly up to a dosage of 1 mg twice a week according to the patient’s serum prolactin level. Before initiating treatment, cardiovascular evaluation should be performed and echocardiography should be considered to assess for valvular disease.

Dosage increases should not occur more rapidly than every 4 weeks. If the patient does not respond adequately, and no additional benefit is observed with higher doses, the lowest dose that achieved maximal response should be used and other therapeutic approaches considered. Patients receiving long term treatment with Cabergoline should undergo periodic assessment of their cardiac status and echocardiography should be considered.

To stop lactation once after start of breastfeeding: 0.25 mg (one half of Cabergoline 0.5 mg table) every 12 hours for two days. To reduce prolactin levels in other conditions: Initially, 0.25 mg twice a week. Dose may be increased up to maximum dose of 4.5 mg or until have responded fully to treatment.

Cabergoline should not be administered concurrently with D2-antagonists, such as Phenothiazines, Butyrophenones, Thioxanthenes, or Metoclopramide, Chlorpromazine, Domperidone, and medicines to lower blood pressure.

Cabergoline tablet is contraindicated in patients with:

Pathological gambling, increased libido, and hypersexuality have been reported in patients treated with dopamine agonists including cabergoline. This has been generally reversible upon reduction of the dose or treatment discontinuation.

Pregnancy category B. It is not known whether this drug is excreted in human milk.

Pediatric Use: Safety and effectiveness of Cabergoline in pediatric patients have not been established.

Geriatric Use: In general, dose selection for an elderly patient should be cautious, usually starting at the low end of the dosing range, reflecting the greater frequency of decreased hepatic, renal, or cardiac function, and of concomitant disease or other drug therapy.

Over dosage might be expected to produce nasal congestion, syncope, or hallucinations. Measures to support blood pressure should be taken if necessary.

Store below 25° C. Keep away from light, moisture & out of reach of children.