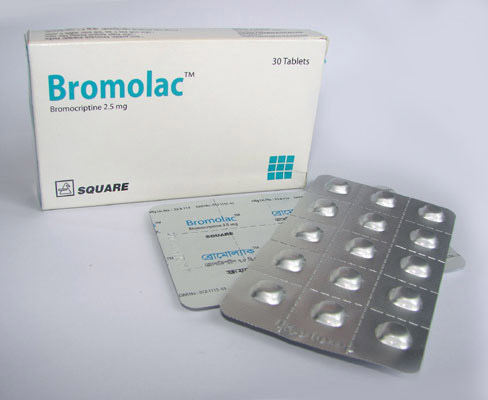 Prolactin secreting adenomas: ln cases where adenectomy is elected, a course of bromocriptine mesilate therapy may be used to reduce the tumor mass prior to surgery.

Acromegaly: Parkinson's Disease: Idiopathic or postencephalitic Parkinson's disease- As adjunctive treatment to levodopa (alone or with a peripheral decarboxylase inhibitor).

Bromocriptine mesilate is a nonhormonal, nonestrogenic agent that inhibits the secretion of prolactin in humans, with little or no effect on other pituitary hormones, except in patients with acromegaly, where it lowers elevated blood levels of growth hormone. Bromocriptine mesilate is a dopamine receptor agonist, which activates post-synaptic dopamine receptors.The dopaminergic neurons in the tuberoinfundibular process modulate the secretion of prolactin from the anterior pituitary by secreting a prolactin inhibitory factor (thought to be dopamine); in the corpus striatum the dopaminergic neurons are involved in the control of motor function. Clinically, it significantly reduces plasma levels of prolactin in patients with physiologically elevated prolactin as well as in patients with hyperprolactinemia.

General: It is recommended that Bromocriptine mesilate be taken with food. Patients should be evaluated frequently during dose escalation to determine the lowest dosage that produces a therapeutic response.

Acromegaly: The initial recommended dosage is 0.5 to 2.5 mg on retiring (with food) for 3 days. An additional 0.5 to 2.5 mg should be added to the treatment regimen as tolerated every 3-7 days until patient obtains optimal therapeutic benefit. The maximal dosage should not exceed 100 mg/day.

Bromocriptine may interact with dopamine antagonists, butyrophenones, and certain other agents. Compounds in these categories result in a decreased efficacy of Bromocriptine: phenothi-azines, haloperidol, metodopramide, pimozide. Concomitant use of Bromocriptine with other ergot alkaloids is not recommended.

Side effects in decreasing order of frequency are: nausea, headache, dizziness, fatigue, lightheadedness, vomiting, abdominal cramps, nasal congestion constipation, diarrhea and drowsiness. A slight hypotensive effect may accompany treatment. The occurrence of adverse reactions may be lessened by temporarily reducing dosage to 0.5 mg. Abnormalities in laboratory tests may include elevations in blood urea nitrogen, SGOT, SGPT, GGPT, CPK, alkaline phosphatase and uric acid,which are usually transient and not of clinical significance

Pregnancy category B. Bromocriptine should not be used during lactation in postpartum women.

Safety and efficacy of bromocriptine mesilate have not been established in patients with renal or hepatic disease. Care should be exercised when administering Bromocriptine therapy concomitantly with other medications known to lower blood pressure.The drug should be used with caution in patients with a history of psychosis or cardiovascular disease. If acromegalic patients or patients with prolactinoma or Parkinson's disease are being treated with Bromocriptine during pregnancy, they should be cautiously observed.

Pediatric use: No data are available for bromocriptine use in pediatric patients under the age of 8 years