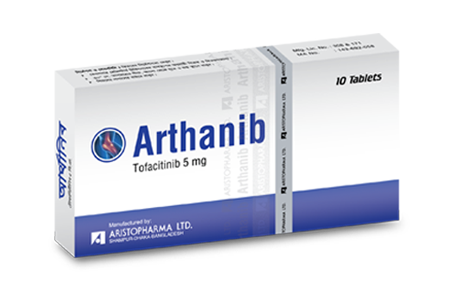 Rheumatoid Arthritis: Tofacitinib is indicated for the treatment of adult patients with moderately to severely active rheumatoid arthritis who have had an inadequate response or intolerance to methotrexate. It may be used as monotherapy or in combination with methotrexate or other nonbiologic disease-modifying antirheumatic drugs (DMARDs).

Psoriatic Arthritis: Tofacitinib is indicated for the treatment of adult patients with active psoriatic arthritis who have had an inadequate response or intolerance to methotrexate or other disease-modifying antirheumatic drugs (DMARDs).

Ulcerative Colitis: Tofacitinib is indicated for the treatment of adult patients with moderately to severely active ulcerative colitis (UC).

Rheumatoid arthritis is an autoimmune disease characterized by a dysregulation of pro-inflammatory cytokines including IL7, IL15, IL21, IL6, IFN-alpha, and IFN-beta. (3) Cytokines signalling results in tissue inflammation and joint damage by stimulating the recruitment and activation of immune cells via the janus kinase signalling pathway.

Tofacitinib is a partial and reversible janus kinase (JAK) inihibitor that will prevent the body from responding to cytokine signals. By inhibiting JAKs, tofacitinib prevents the phosphorylation and activation of STATs. The JAK-STAT signalling pathway is involved in the transcription of cells involved in hematopoiesis, and immune cell function. Tofacitinib works therapeutically by inhibiting the JAK-STAT pathway to decrease the inflammatory response. However, there is evidence to suggest that it may also achieve efficacy via other pathways as well.

The most commonly reported adverse reactions during the first 3 months in controlled clinical trials (occurring in greater than or equal to 2% of patients treated with Tofacitinib monotherapy or in combination with DMARDs) were upper respiratory tract infections, headache, diarrhea and nasopharyngitis.

Pregnancy Category C. There are no adequate and well controlled studies in pregnant women. Tofacitinib should be used during pregnancy only if the potential benefit justifies the potential risk to the fetus.

It is not known whether Tofacitinib is excreted in human milk. Because many drugs are excreted in human milk and because of the potential for serious adverse reactions in nursing infants from Tofacitinib, a decision should be made whether to discontinue nursing or to discontinue the drug, taking into account the importance of the drug for the mother

Pediatric Use: The safety and effectiveness of Tofacitinib in pediatric patients have not been established.

Geriatric Use: The frequency of serious infection among Tofacitinib-treated subjects 65 years of age and older was higher than among those under the age of 65. As there is a higher incidence of infections in the elderly population in general, caution should be used when treating the elderly.

Moderate and severe renal impairment or moderate hepatic impairment: half the total daily dosage recommended for patients with normal renal and hepatic function.

Store below 30°C. Protect from light & moisture. Keep all medicines out of the reach of children.